Home Personal Finance Traveling Was Too Expensive, Until I Learned To Compare Flight Prices With Google Flights

I figured my travel days were over after my wife and I completed three straight years of procreation. Discretionary income was one issue: Kids are costly and unable to contribute financially unless they’ve been blessed with a rare talent, like Michael Jackson in the Jackson 5 or the great Honey Boo Boo. And comfort was another issue: Traveling with kids when they’re still of tantrum age, off their routine, and on a long flight is more of a stress test than a vacation.

Now, five years after the birth of our first boy, we are able to travel. Cheaply. In the past year, we’ve flown to Havana, Cuba ($400 per ticket), Reykjavik, Iceland ($300), Columbus, Ohio ($75), Denver, Colorado ($50), and Vegas ($30). And it’s actually pretty easy to find good deals, without even having to build frequent flyer miles or sit at the airport lookin’ all goofy while hoping to fly standby. (I should also note that the Lawd has provided us with parents who enjoy watching their grandkids).

I begin each flight search using Google Flights to compare airline ticket prices. If your dates are flexible, it’s a great tool for planning trips around the best deals. (You can’t be cheap and picky!) For example, when I planned our trip Reykjavik, Iceland, I only selected the numbers of days I wanted to stay and then hit “price graph.” The graph showed a four-day round-trip ticket from Los Angeles to Reykjavik from $300 to $1,500, depending on the month and day. Of course, in consideration of our relatively meager income and need to pay bills upon return, we took the deal. 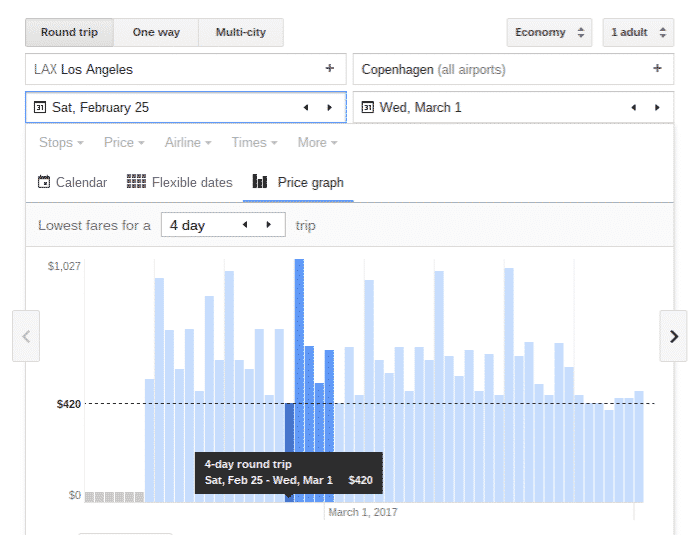 Price graph showing the cost range of a trip to Los Angeles to Copenhagen, Denmark.

But Google Flights also works well if you need to travel last minute or on specific dates. Another example: I needed to go from San Diego, California to Columbus, Ohio on short notice. I put my dates in and pulled up Flights’ world map, looking to get anywhere near Columbus for a possible fly-and-drive. I compared flight prices to number of Midwestern destinations. No luck. But I did see a $70 flight from San Diego to Vegas on Spirit Airlines. Then I saw a one-way ticket from Vegas to Columbus for less than $100. (By the way, if you’re flying with Spirit, buy your tickets in-person at the check-in counter. If you buy online they charge a pretty slick “passenger usage fee” of $18 each way. So on a round-trip you’re paying 30-something dollars just to BOOK your ticket.)

But wait, my parents live in Cleveland, about two hours north of Columbus. I wanted to see them; they curse a lot and tell good jokes. So I ended up buying three separate tickets: a round-trip from San Diego to Vegas, a one-way from Vegas to Columbus, and another one-way from Cleveland to San Diego. (I drove from Columbus to Cleveland.) Bonus: To make sure I made my flight to Columbus, I left a day early and stayed a night in Vegas, where I drank myself silly. What may sound like a hassle was actually a mini-vacation, and I spent about $400 less than I would have buying only a round-trip ticket from San Diego to Columbus.

I’m using this same concept for our to be determined trip to Dakar, Senegal. A 10-day round-trip ticket from San Diego to Dakar ranges from $1,232 to $2,002 over the next couple of months. However, I can buy a round-trip ticket from Los Angeles to Dublin, Ireland ($400), a one-way from Dublin to Malaga, Spain ($43), another one-way from Malaga to Dakar ($140), and lastly, a one-way from Dakar to Dublin ($210), saving at least a few hundred dollars and giving ourselves the opportunity to briefly visit two other interesting cities. All I have to do is leave myself some pad time in case of delays, lest I be stuck at the airport with my wife giving me the “That’s what you get for being cheap” look. 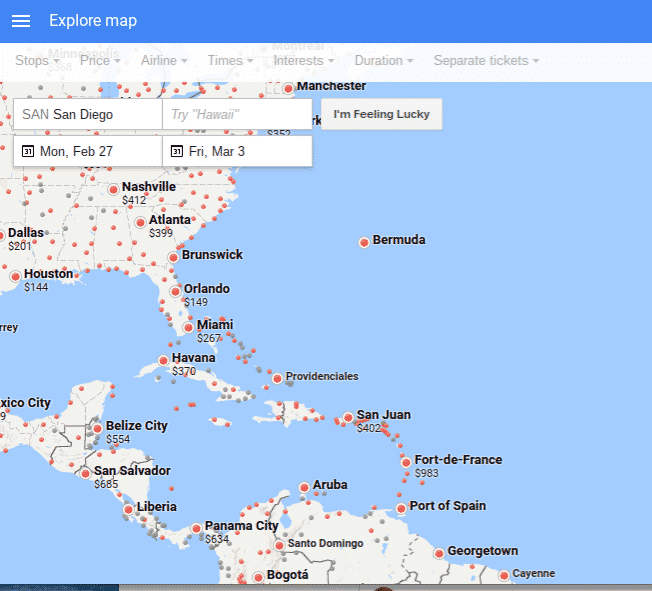 An example of a Google Flights map search of flights from San Diego. If a city does not have a price listed, just click it. Feel free to scroll across the world!

I’m sure there are a lot of other tricks for buying flights at a discount. Like, you can buy tickets in different currencies, preferably using a credit card without foreign transaction fees (Capital One), or pay your bills with a card that accumulates airline rewards. Packing light would also be an option. I’ve recently started to only travel with the bag below, which has made it on-board free of charge on the most stingy of airlines. It’s not huge, but it can hold my laptop, underwear, shirts and sweaters, and a change of shoes and pants. It also has a hidden pocket for marijuana edibles, if that’s your thing, though checked baggage would probably be a better option. 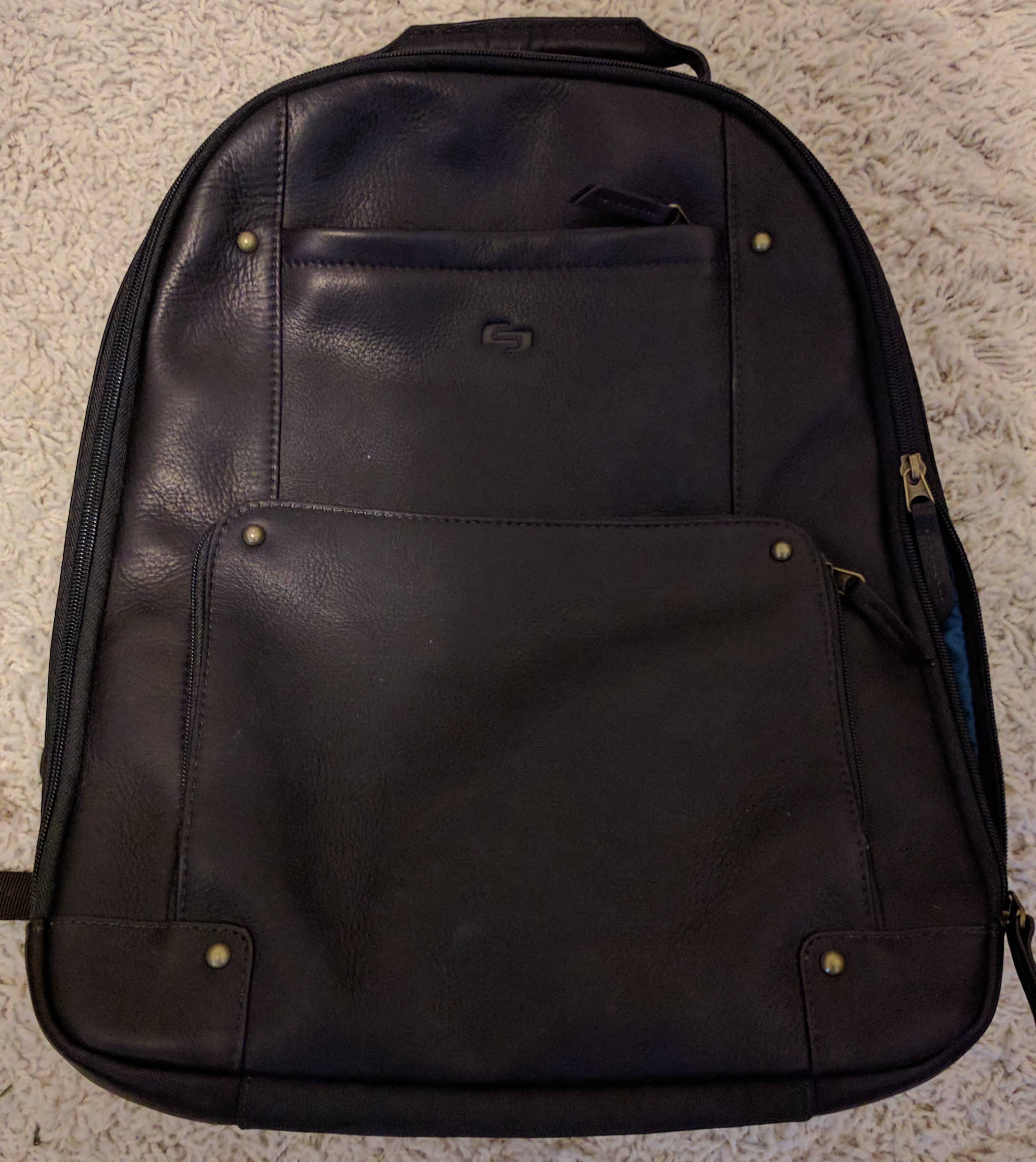 Thanks to all no-frills airliners, we’re in the golden age of discount travel. You can pretty much fly anywhere in the world for far less than $1,000. Room and board is usually an even better deal; grab a room on Hotwire—easily the best hotel website out there—or anger local city councils by booking an apartment or home through Airbnb. Whatever the case, compare prices on Google Flights and go soon. The next thing you know you might have three kids.

Note: Ticket prices for Southwest Airlines are not listed on Google Flights, which is OK because I hardly ever find a really, really good deal on Southwest.

Having Fun At LEGOLAND, Without Actually Going Inside LEGOLAND