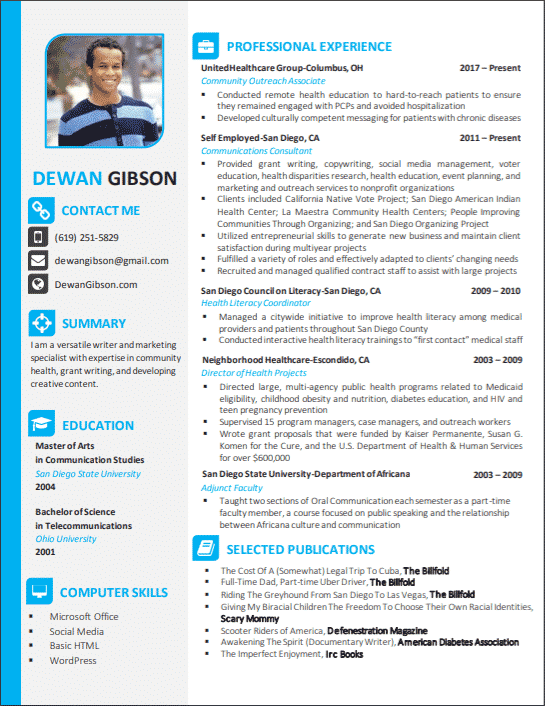 I began looking for contract, remote, and other flexible jobs after I started a family and decided it would be fun to stay home with my kids and their friends from Daniel Tiger’s Neighborhood. Since then, people have often asked how I find work that provides freedom and solid income, albeit at the bottom of the corporate caste system. Well, there’s no one way. So I figure that I can best help someone looking to ease the corporate foot off their throat by giving examples of how I found or stumbled upon various gigs.

Program Evaluator for a University Enrichment Program
This position was posted on Idealist.org, a website that connects do-gooders to whatever is going on in the world of Do-goodum, including jobs. I was under-qualified, so instead of just a resume and cover letter I sent a detailed proposal of how I would evaluate the program if given the contract. I was called in for a presentation and nailed it. By “nailed it” I mean I didn’t stutter as much as I usually do. I also charged less than the competition. Lastly, it didn’t hurt that the professor who hired me was the blackest white man I’ve ever met. No lie…he even had a Jheri curl. I’m sure he wanted to help a young brotha out. The contract paid $13,000 per year for what was maybe 20 hours of work per month. I kept it for three years.

Health Disparities Researcher For A National Social Justice Campaign
I attended a press conference for the passage of the Affordable Care Act where I talked with a community organizer who was helping to implement the program in cities with large numbers of health disparities. I mentioned that I had just lost my full-time job doing similar work for some haters at another organization. She sensed my passion for helping to ensure people don’t go broke or die because they lack health insurance and would later ask if I’d like to go on a lobbying/fact-finding trip to D.C. Once there, I met some other people from the organization’s national team and got a research gig that paid $35 an hour. I ended up working with the organization off and on in different capacities for the next six years.

Grant Writer for a Community Health Center
If you can see past the smut and scams, there are some legit flexible job opportunities on Craigslist. This grant writer position began as an onsite gig, but office space became an issue and they told me to work from home. Cool. Well it was cool until I went to a team meeting and the supervisor didn’t agree with my marketing ideas because “Hispanics don’t want to sit in the clinic waiting room with black people.” Well damn! I spoke up and “coincidentally” my contract was not renewed shortly thereafter. Peace out! But still, it was worth the experience I gained and Craigslist is still worth a browse. Maybe more so now since they’re charging people to post gigs.

Digital Marketing/Jack of all Trades At A Native American Clinic
I had a meeting with this clinic while working for another company, as the two organizations were looking to collaborate on a project. I must have talked like I had a little sense because the supervisor at the host company called my office out of nowhere a few days later and asked if I was interested in a contract job. I took it and stayed for about a year. Good people–I even made a friend–but it was not the best run company. (I witnessed a co-worker being fired while his replacement stood nearby waiting to be trained by they guy who lost his job.) Come on, man!

What’s funny is that I actually got another gig from working at this clinic. I was at a pow wow and this guy was asking people to sign a petition for something that I must have cared about, though not enough to remember what it was. We talked for a few minutes and I signed up for his email list. From this list I learned of an announcement for a gig as a Social Media Coordinator with a Native American voter engagement organization. I applied, and dammit I got it. Maybe they’ll invite me back next election cycle?

Remote Health Educator At A Healthcare Conglomerate
I recently wrote about my health educator job and how I was temporarily de-swaginated after the company ended contracts with all its Ohio staff. But what I didn’t mention is that I found this remote position through Indeed. In fact, Indeed is probably the premier site for all jobs, whether contract or otherwise. To find gigs I do a nationwide search and browse all day like most of the employed populace does on Facebook while at work. Eventually something of interest pops up, even if the site’s algorithm tends to recommend that I apply for jobs unrelated to my education and experience. (I’m thinking they follow me across the ‘net and get my interests all mixed up.)

Better yet, the job announcement for this position was posted on Indeed by a staffing agency, who tend to have the most stress-free interviews. They look at your cover letter and resume, and if you’re qualified, they’re like, “When can you start?” None of those silly hypothetical or “gotcha” questions that only display how quickly one can come up with a lie.

I Can’t Finish Without A Lil’ Shameless Self-Promo
As if my resume posted at the top of this post isn’t enough of a hint, I’m always open to new opportunities. This includes the sort of work listed on my resume and also one-time gigs such as personal statement editing for potential graduate and medical students (especially international students), speechwriting, business plan development, and composing cover letters. Just don’t lowball me, bro.

One Year Of (Expected And Unexpected) Home Maintenance Costs