Home Personal Finance I Made A Free $1,000 Just By Opening A Few Checking Accounts

I Made A Free $1,000 Just By Opening A Few Checking Accounts 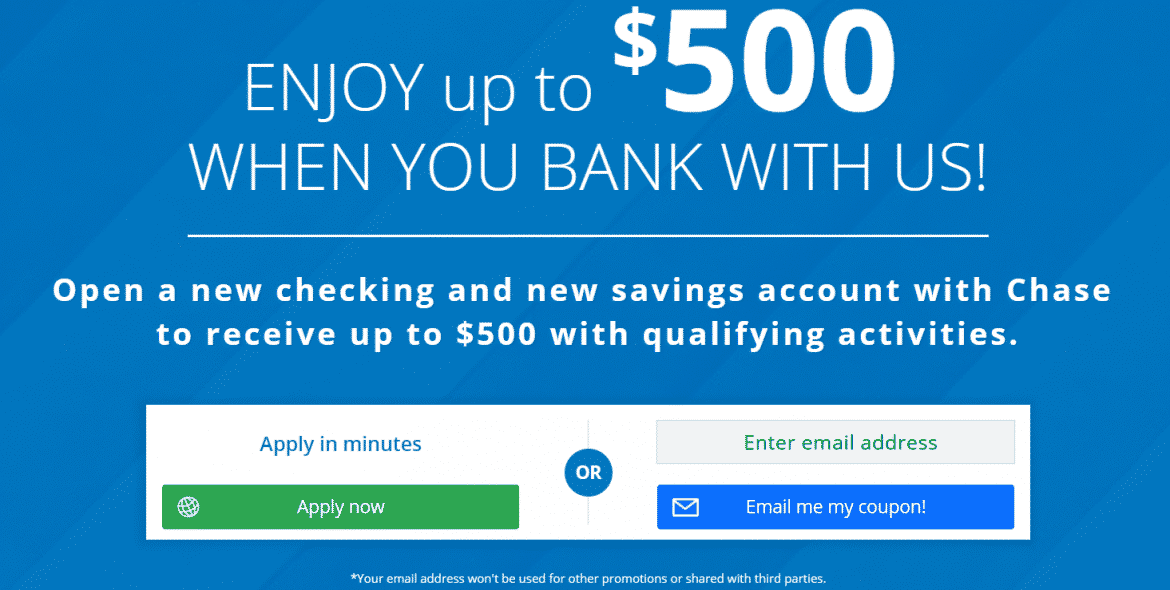 Thanks to deficit-funded tax cuts championed by that disturbed guy in the White House, corporations are flush with cash, especially financial institutions. They are using the extra money for stock buybacks and general world domination. However, for us low and middle-income peasants, who drive the American consumer economy by purchasing stuff we don’t need with debt, wages after inflation remain flat. So to keep the jig going until it crashes (again!), many of us take on second jobs, side gigs, and other hustles. One of my favorites is getting free money for opening checking accounts, which I did four times this month, earning a total of $1,000.

Note: You don’t have to be a VIP/HNIC to get the deal. You can find the code on Chase’s website. If you do hear of a special targeted deal and can’t find information online, you can often buy codes on eBay, typically for no more than $15.

After opening the account with Chase, I Googled “checking account bonuses September 2018” and found more deals. (Personal finance blogs like Doctor of Credit are good resources for finding bank bonuses.) I’m fortunate enough to have two sources of income via direct deposit, one of which allows me to split the deposit among up to 10 banks.

The next account I applied for was with Citizens Bank. They were offering a $200 bonus for opening a One Deposit Checking account. The only catch was that you have to a one-time direct deposit of at least $500. The $9.99 account maintenance fee is waived as long as I make a deposit of any amount or type during each statement period.

The following morning I opened a checking account with Fifth Third Bank. Unlike the other banks, Fifth Third required applicants to apply for the $200 bonus in person or over the phone. This is so they can pitch you additional products. Not a big deal, I gave one word answers and repeated, “I just want the regular ol’ free checking account.” However, the terms for the Fifth Third bonus are a bit more time restrictive. I have to keep an account balance of $500 for 60 days, but at least the account is free. I think of it as a mini emergency fund with a 40 percent return on investment in just two months.

After my direct deposits hit the three accounts detailed above, therefore qualifying me for the bonuses, I opened an account with Key Bank and canceled additional direct deposits from going into my Citizens Bank account. (Citizens Bank only required a one-time direct deposit to get the account bonus, and, as mentioned, the account is free with any sort of in-person or mobile deposit.) Key Bank was offering a $300 bonus with a minimum opening deposit of $50 and $500 direct deposit completed within 60 days, so I jumped right on that.

Overall, I’m set to receive $1,000 for about 30 minutes of work, which largely consisted of entering my name, address, and other personal information. My plan is to open (and close) accounts every six or so months and soon venture into credit cards that offer cash bonuses. My heart is forever with Capital One 360, so I’ll just transfer over direct deposits from the temporary accounts and continue to use that as my primary account. I figure I can easily make at least an extra $3,000 a year. I’ll also ask my wife to open some accounts. This will double our free money, though also increase the number of expensive vacations that she takes to Target. Gotta stimulate that consumer economy.

Parents: Don’t Be Guilted Into Getting A Family Dog

One Year Of (Expected And Unexpected) Home Maintenance...