It’s been a rough month. We’re near an election, so I’ve taken a five-week night job leading a phone bank that aims to convince California voters to fund education by taxing that wealthy ass. This, along with my other contract at the community clinic, keeps me away from home from 7:30 a.m. to 9:30 p.m., leaving Amber and Grandma and Grandpa to watch our three loving but ill-mannered children.

To make matters more hectic, our house is on the market. We have to keep it clean because people show up on short notice just to browse and shit. And it’s not that we’re unclean people, it’s just that we often have remnants of children—toys, fecal matter, and rash cream—spread throughout our home. (Sidenote: We accepted a cash offer from an investor, but she changed her mind as we went to sign escrow papers. Can you believe when that heifer showed up for the pre-escrow inspection, she had the nerve to ask me, “Are you a renter?”)

Anyway, working day and night is the antithesis of my very being, and more importantly, I knew Amber needed a break from excessive parenting. So we took a two-night marijuana-enhanced trip to Denver.

DAY ONE
I’ve taken Spirit Airlines and I can best describe it as flying while wearing leg-cuffs, as if you’re on Con Air. Not to say I’m beyond flying like that for the right price, but it’s just not a pleasant experience. I expected similar from Frontier, another discount airline, but they actually had legroom and a check-in staff who won’t cuss you out. Total cost for a roundtrip ticket from San Diego to Denver for two and a checked bag: $153.40.

Upon arrival to Denver, we grabbed a rental car and headed to the Westin downtown, which I reserved via Hotwire for $145 a night (including taxes). It was a sharp hotel. Four-star amenities and smack in the middle of Denver’s main food and entertainment district. Bonus: Our room was culturally appropriate in that it was right next to the hotel’s indoor basketball court.

We didn’t get settled till until about 9 p.m., so our first stop was for food. It was a Thursday night and downtown was a little bare. We ended up at a sushi spot that was to close in 40 minutes. They were out of white rice, but the waiter assured us our rolls would be good with brown rice. Maybe so, but the brown rice wasn’t sticking. It took the sushi chef about 30 minutes to pull together three rolls. The food was OK, probably not worth the price, and definitely not as memorable as the sake, which ran our bill up to $57. Remind me to take my broke ass to the food truck next time. 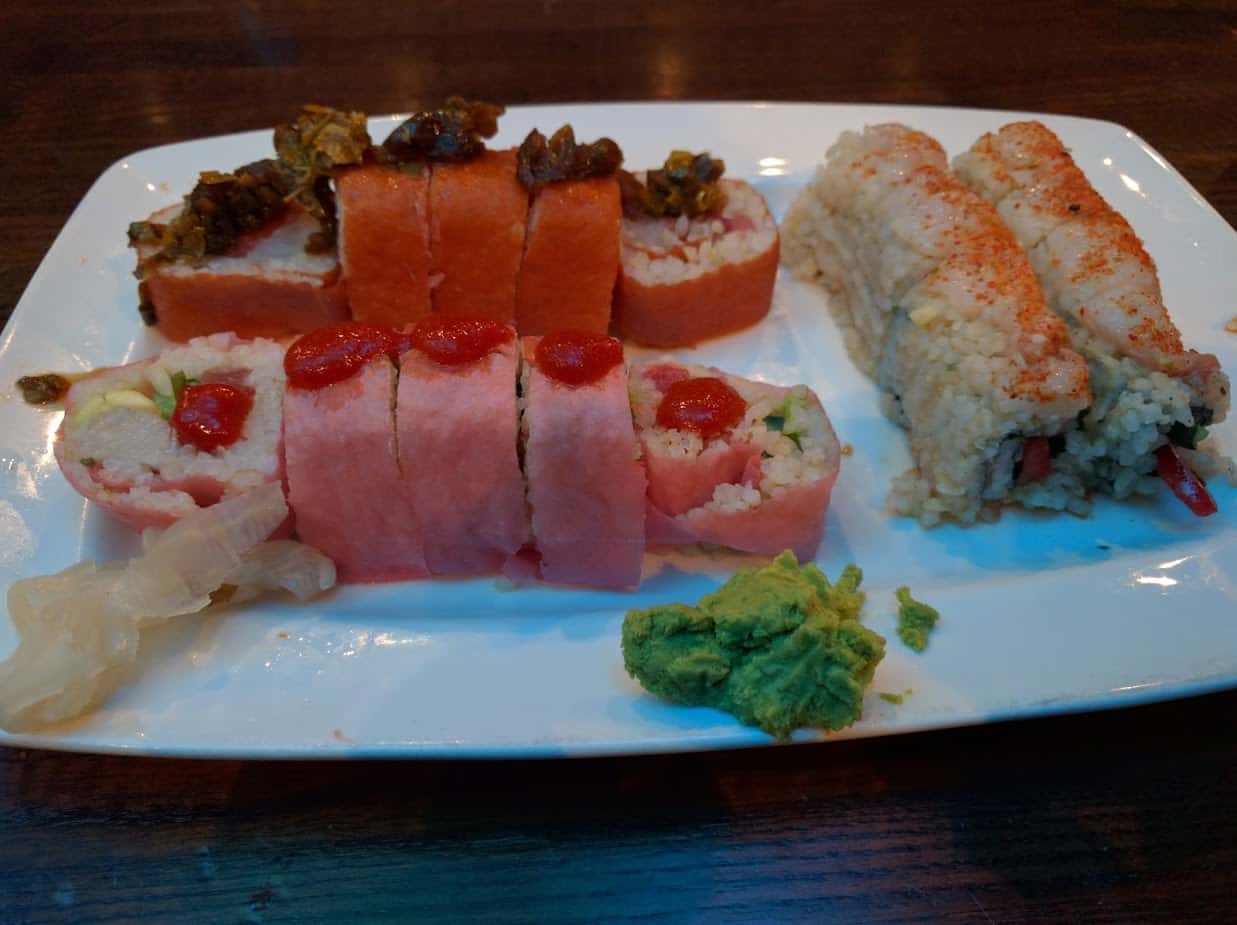 All the nearby weed outlets were closed by the time we finished dinner, but dammit, we wanted marijuana so we didn’t give up that easily. I searched Yelp and found Northern Lights Cannabis Company, which was open until midnight, and just 10 minutes away.

Once we got there, it really hit me that I’ve never actually bought weed. I’ve only shared it with friends. Now, I typically have no idea what I’m smoking, but I trust said friends because they’re Jamericans who have devoted their lives to “di ganja” and a low-stress lifestyle.

The budtender (yeah, that’s really what they’re called), was pleasant and didn’t seem to be annoyed that we were newbies with elementary questions, including, “Can we take pictures?” She helped us choose a pre-rolled indica joint ($12) and a Boulder Bar edible ($25). Cash only.

Recreational marijuana is legal in Colorado, but you can’t smoke in public, though it wasn’t too uncommon to see people doing just that. Still, on account of my hyper-melanin skin tone, I obeyed the law, for the most part.

We parked near our hotel and lit up in the car. After six or seven puffs, burning lungs, and crying Jordan meme eyes, we went back to our room on an insta-high, all sensual and full of virility. Man, the weed had me feeling like I smoked Cialis. 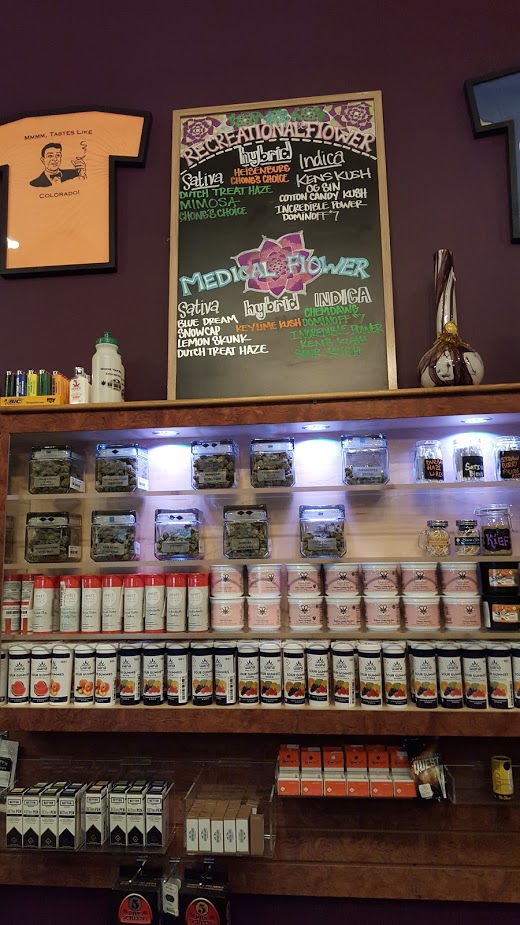 DAY TWO
Hotel parking was $40. To save cash, I parked at a meter for 50 cents an hours. However, I had to move the car at 8 a.m., which set my internal clock off at 6 a.m. Being cheap and afraid of a parking ticket is one hell of an alarm. Restless, I walked the streets and hung out in 7-Eleven. Amber slept awhile longer, and then we went to breakfast.

While Amber ate prosciutto and eggs at a hipster joint that printed caloric intake on its receipts, I wandered downtown in search of place that offered early lunch. My search was fruitless, but I did meet a street beggar who had very few teeth and a big appetite. He asked for money and I turned him down. Then he asked for food. He had the hunger shakes, or maybe it was drug withdrawal, but food would not have hurt either way.

I agreed to buy him a breakfast burrito from a taco stand. Then he grabbed a Sprite from the ice bin and tried to add it to my order. I shook my head, “Nah, man, not the Sprite, they probably have free water.” A guy ahead of me in line volunteered to get the pop as long as I bought the burrito. Cool. As we waited for the food, the beggar told me that he was just released from prison. He added, “I haven’t had sex in 11 years! I ain’t touch none of them young boys!” 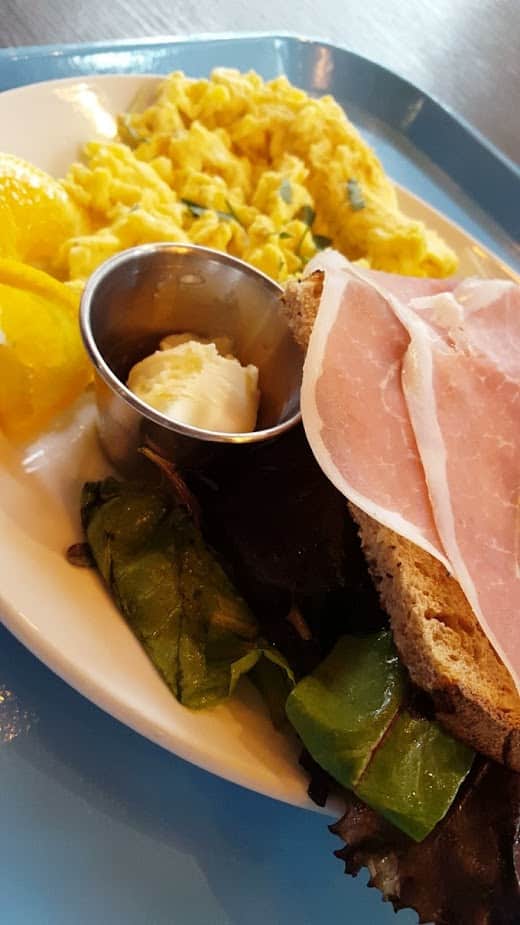 After breakfast, we drove 30 minutes to Boulder, a city that looked like a large Whole Foods. There we met up with Amber’s cousin, Mike. He’s one of those guys who knows everyone. And soon we did, too. As someone who often pretends not to see people I know, out of fear of having little to say, I was in awe of his nature to seek people out for conversation and hugs, even while sober.

The three of us had lunch and said our goodbyes. Amber and I then drove to Red Rock—a park and amphitheater where you can take pictures of (but not climb!) giant rocks of odd shapes and autumn colors. 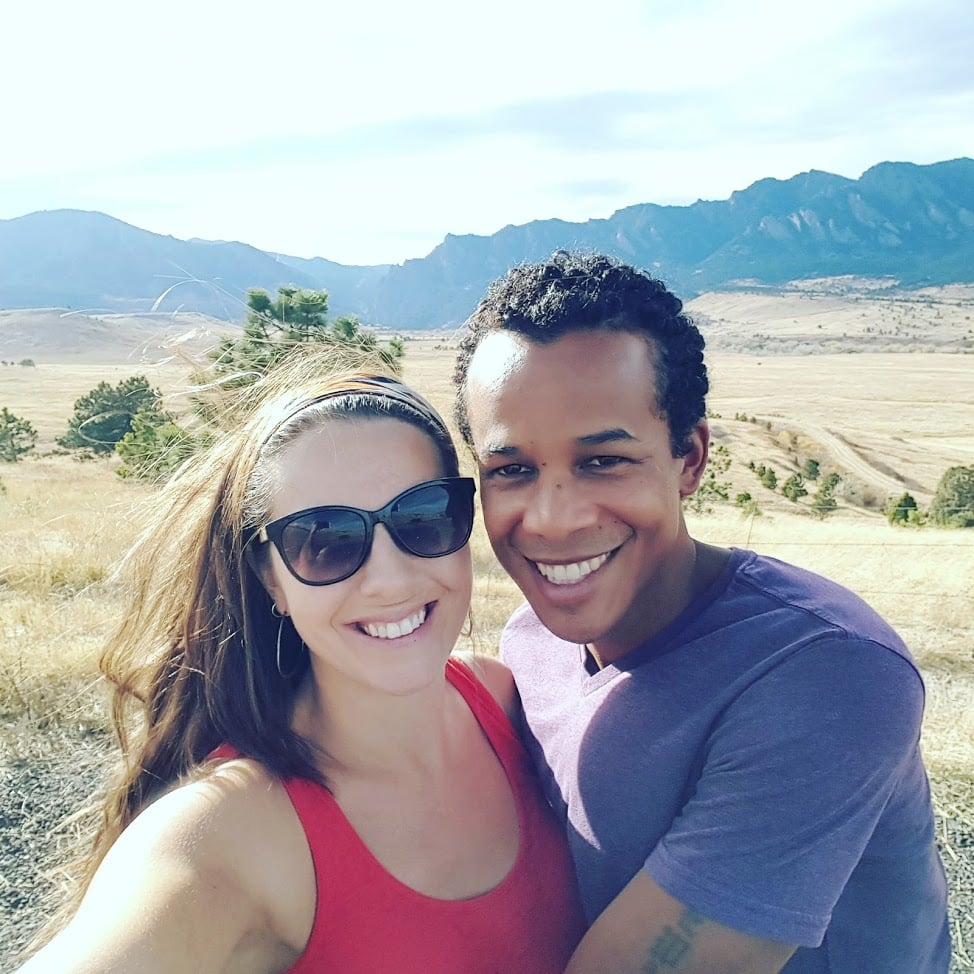 We made our way back to Denver and parked for free in a residential neighborhood a little more than a mile from our hotel. During the walk back, we stopped at Uniqlo for its grand opening. It was pretty much a Japanese H&M.

Amber tried on an armful of clothes and ended up buying a hybrid scarf-poncho. I bought two pairs of khakis, slim fit joints that came in an ultra-rare size 31×34, which means, for the first time in my adult life, I do not have to wear highwaters to work. Evidently, my quasi-good deed at the taco stand came back to me in the form of chinos that fit my small waist and long deer legs. 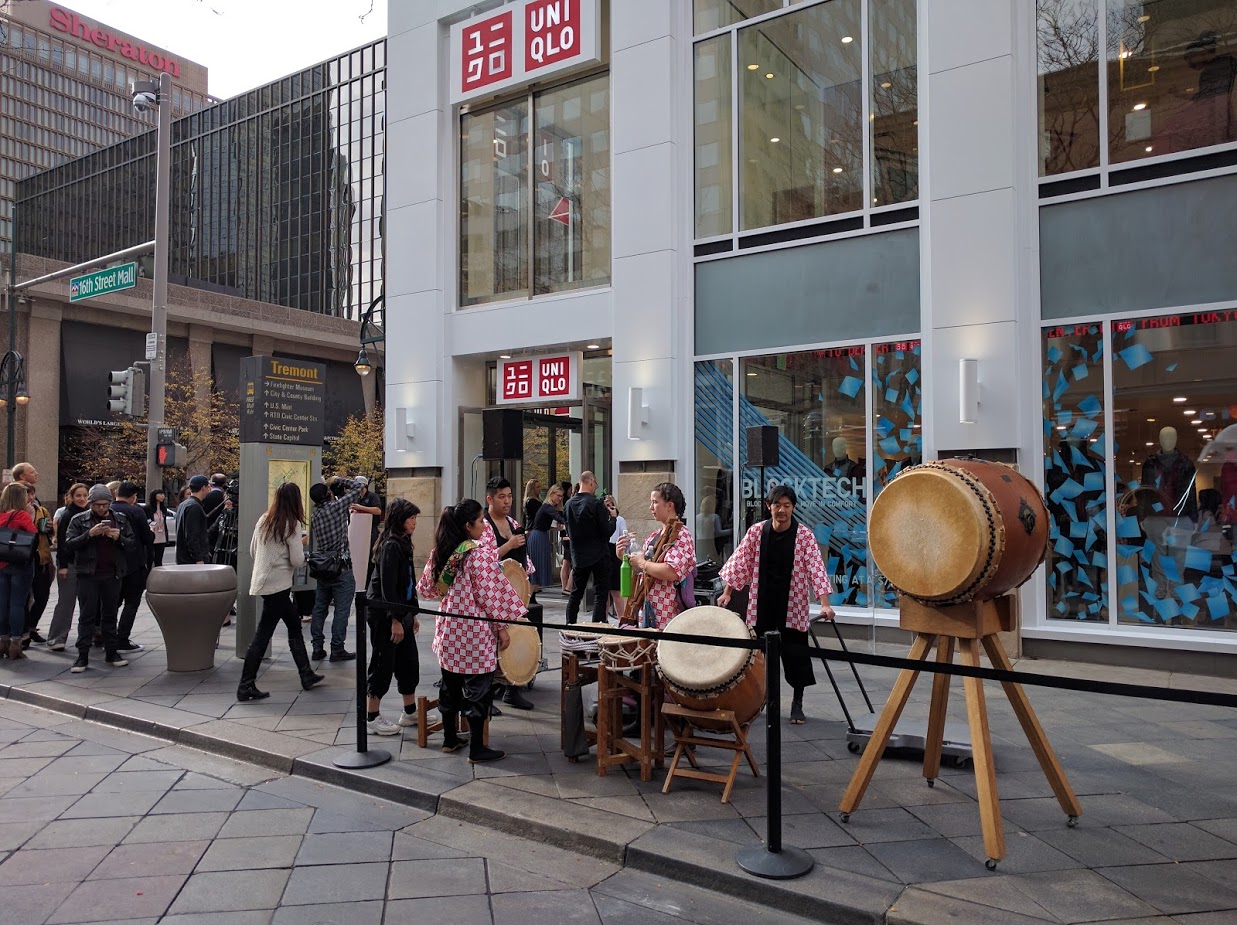 Our night ended at an Italian restaurant. We had bruschetta and pizza before breaking out the edibles. After exhaustive internet research of proper dosage, Amber had one square of the 10 square chocolate bar. She’s thick (I mean that in the good African American way), but she was unsure of how her body would respond. I had two squares. We walked back to the hotel with plans to bar hop later. We both knew that wasn’t happening.

After about an hour, the edibles hit us. I was all tingly, especially in the loin region. Amber turned red and goofy. She laughed at me for laughing at her. Soon it was morning. 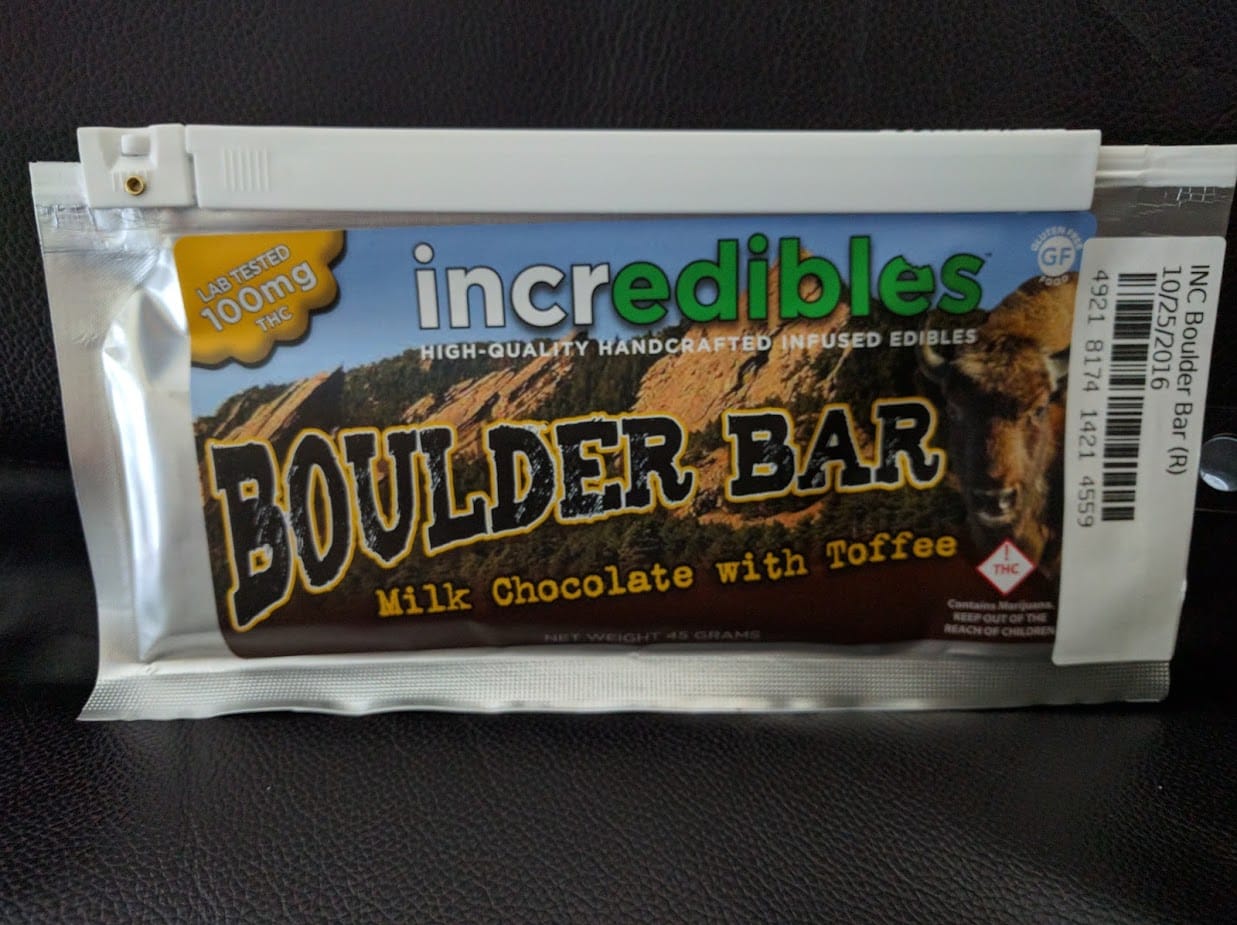 DAY THREE
The hardest part about leaving Denver is deciding whether or not to take your weed home. Technically, you can be arrested at the airport, though from what I’ve read, police will just ask you to throw it away.

After debate and a lot of worry on Amber’s part, we reached a compromise: Trash the roach that was left over from the joint, put the Boulder Bar in a different candy wrapper, and hide it in the checked bag. “And if we do get caught,” I told her. “Just blame it on me.” Hell, as long as one person in the marriage has a clean criminal record and good credit, we’re fine. 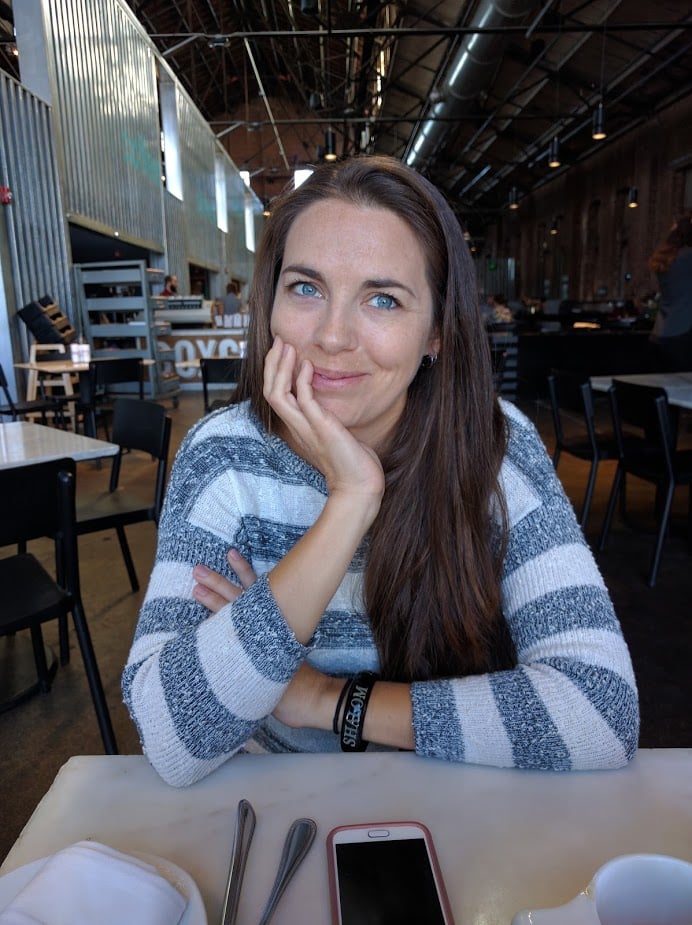 We made it home safely. The edibles did, too. And we’ll soon eat them in celebration of the new offer on our home that we just accepted.

Interracial Marriage: Once You Go White…You’re In For A Lifetime Fight!

Gone Till November: Pictures Of What I Missed As A Temporarily Absent Father

Driving Across The Country While Black (With My White Wife, Marijuana Edibles, And Expired Tags) - DewanGibson.Com March 10, 2017 - 11:47 am

[…] of God’s plan, we found a parking space directly across a marijuana dispensary. I wanted to buy a Boulder Bar, but three factors smartened me up: the expired tags, being black while driving through the boonies […]