Living in Southern California means easy access to Las Vegas. Maybe too easy. Everyone goes and you hear about it far too often, mostly by way of the trite phrase “What happens in Vegas stays in Vegas,” which is untrue in many instances, especially if you’re talking about The Herp. But with our upcoming move to Ohio, I’ll have far fewer opportunities to visit America’s mecca of crushed dreams. So I took my last (for now) one-night guys’ trip to Vegas and found some pretty cool things to do alone.

First things first: The guys’ trip turned into a guy trip. My longtime friend was unable to get a seat on a standby flight from Austin. And no one else I asked could (i.e. wanted to) go, which was fine. Years prior to taking trips and kiss selfies with my wife, I was a frequent solo traveler. So I can be alone and not feel as if people are staring at me when eating in a restaurant or drinking myself silly at a bar where nobody knows my name.

I flew to Las Vegas via Spirit Airlines, which is no worse than riding Greyhound and often cheaper, provided you know the secret: Take your ass to the airport and buy your ticket in person. If you buy Spirit online they charge a passenger usage fee of like $40. My roundtrip ticket to Vegas was only $31, and I skipped the baggage fees by stuffing my draws and a few t-shirts into my personal item, which in my case was a diaper bag.

The first thing I did when I got to Las Vegas was check out Club Walmart. Of course I was there for the obligatory people watching, but I also needed some Krazy Glue to fix my boots; the sole was coming apart, or, as my dad said when I told him, the sole was “flapping and talking.” He would go on to say, “I ain’t seen shit like that since I was kid…the bar probably give yo’ ass a free drink once they see them goddamn boots!”

I fixed my goddamn boots and checked into the Downtown Grand, a recently remodeled 3.5 star hotel and a steal at $23 bucks a night through Hotwire. I was given a room on the 25th floor and could not have asked for a better view of downtown’s parking garages. I typically stay on the Strip, but I’m too old and too married for $15 drinks and EDM. Bars in Downtown Vegas have reasonable drink prices. They also play music that doesn’t make people do shameful variations of the original running man. 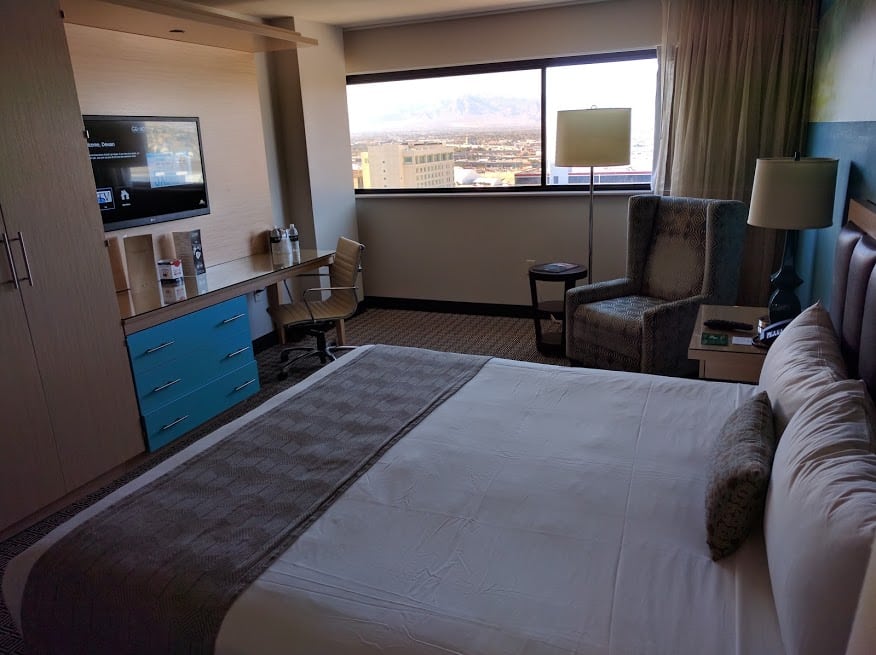 From the hotel, I walked aimlessly downtown, which never gets old when alone, especially if you’re in Las Vegas. I saw a sculpture of a giant praying mantis and a shopping center made from shipping containers. I stopped in a Thai restaurant to eat, where I ordered the cheapest beer on the menu (Chang?) and a plate of chicken fried rice. 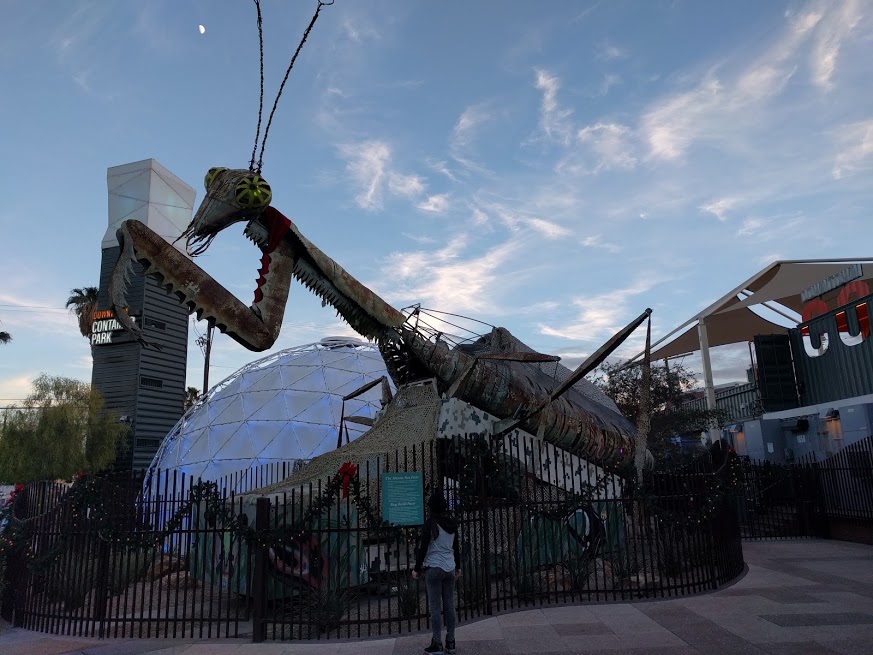 My waiter looked like Drake. So much so that I wanted to ask him for a picture. I thought better of it; as a fellow Lightskin I know it can be annoying when people say we resemble other Lightskins. You know how many times I’ve been called El DeBarge? Plus men don’t typically ask other men for pictures, especially black men, though maybe it would have been OK if I had ended the request with “no homo.”

After dinner, I saw an outdoor country music performance. It’s not really my thing, but I try to support artists who are being ignored by sparse crowds. I gave them 10 minutes and some applause, but they lost me when the lead singer yelled “Where my redneck women at!” Hell, I don’t know…maybe ask Ted Nugent? 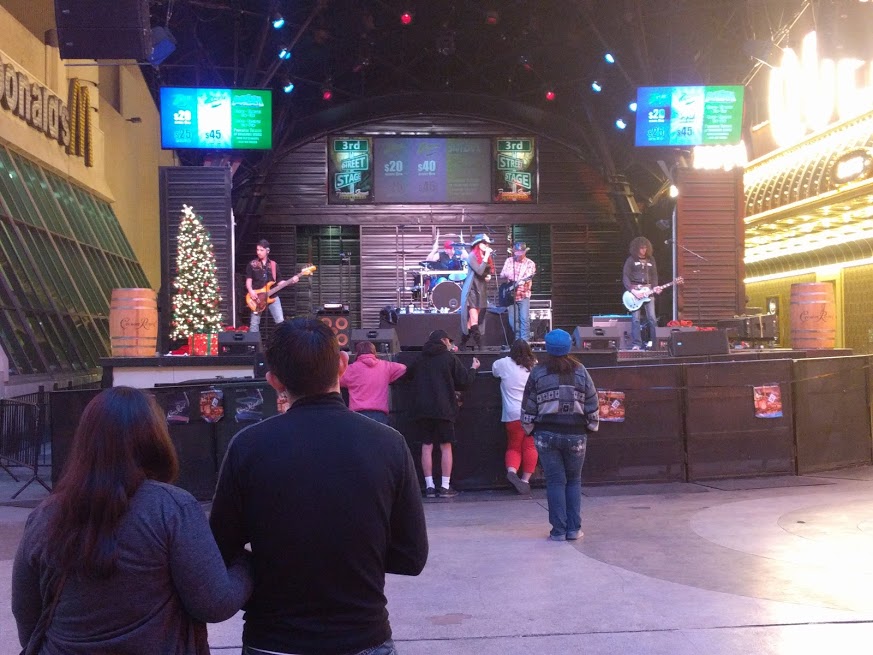 I returned to the hotel for a nap that lasted way too long. I got motivated around 11 and went to a rooftop spot for reggae night. A Latina with heavy makeup and long feet scowled and said “excuse me” after I accidentally walked through one of the many pictures she was taking of her boyfriend. I apologized, but she just rolled her eyes.

I stayed a bit longer to watch the reggae band. The backup singer had a mean falsetto. He should consider adding “The” as an definite article before his name, like high pitch singers The Weeknd and The Dream.

Another couple came by and stood next to me. The woman kept taking selfies with her uninterested boyfriend. Conscious of also ruining their pictures, I scooted over and gave them a bit of my bar territory. The pictures and flash just kept coming, so I scooted right out of that place.

I roamed the streets a bit more until I heard hip hop coming from a bar called Vanguard. The music said “drop that ass low,” which sounded like a good use of my time.

I stopped in and ordered a whiskey. And then another. The young folks did all the dances I see on Facebook videos. As I sat at the bar and watched, I got some random ass-cheek on my kneecap. It may have been intentional. The girl’s friends laughed as she danced back over towards them. Then they came over and stood by me, gigglin’ and shit. I think they wanted me to buy drinks. They must not have realized I was married and wearing boots held together by Krazy Glue. 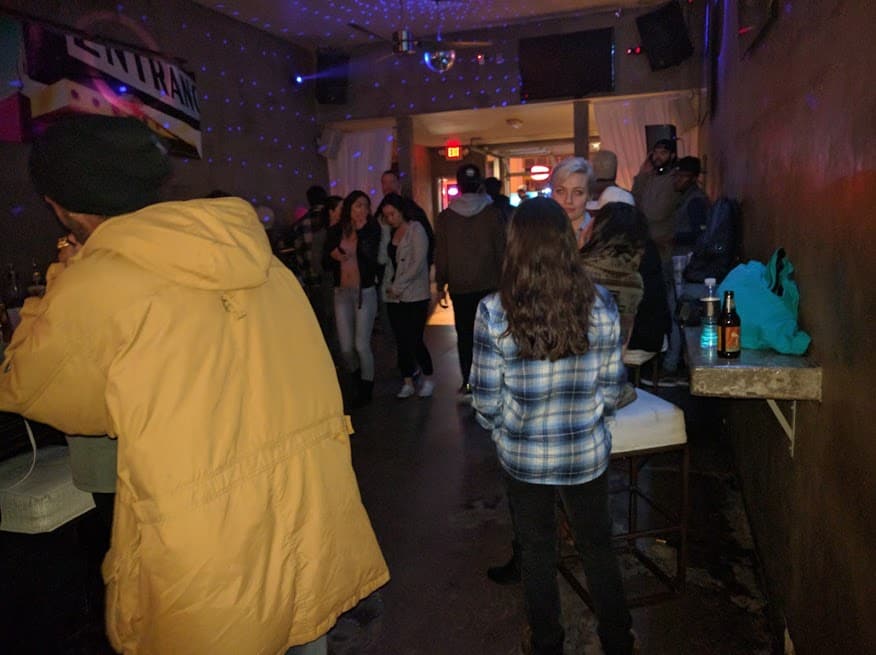 I ended the night at a bar called Commonwealth. The majority of the crowd, which may have been a private party, filtered out as I came in. The bartender seemed ready to go home. I ordered a fancy beer that cost nine damn dollars. The menu listed all its ingredients and alcohol content, though it forgot to note that it didn’t actually taste good.

After a couple sips, I left the beer on the counter. I hit the streets in search of some casino that offered prime rib dinner all night for just $9.99. I couldn’t find it. It was freezing outside so I started to sprint, weaving between the less athletic drunks. Still no luck. So I ran into a Subway and devoured an artificial chicken breast sandwich. Then I went back to the hotel and drunk dialed my wife and kids, hoping to tell them of all the things I found to do while alone in Las Vegas.