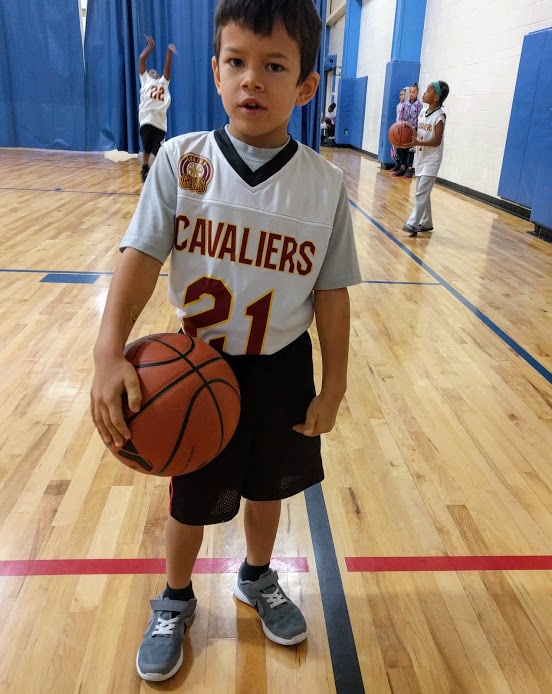 My first real basketball game was in the seventh grade. I played for the Wiley Middle School Warriors. Well, kind of. I was actually on the C-team. It was the squad for kids who either: 1) broke down in tears after being cut from the official team; or 2) had potential but had been overlooked during the tryout. I was part of the teary-eyed group.

We played one game that year. It was against Solomon Schechter, a Jewish school for kids whose parents didn’t really mess with black people like that. My big break came after halftime. A teammate passed me the ball and I ran as fast I could in my tiny short-shorts and scored a wide open layup. The crowd went wild…with laughter. I had shot the ball in my opponents’ hoop. F**k!

Minutes later, Mr. Love, who was the ref and my science teacher and wore some variation of a mullet, gave me a technical foul. I had disrespected him by saying “WHAT!” after a bad call. He didn’t like me, and rightfully so. I was a fool in his class. I used to act up in hopes that he would write my name on the board. That way, the girl whom I had a crush on, who was in the class after mine, would see it on the board and think of me. Man, I told y’all I been crazy.

I would go on to get cut a few more times throughout middle and high school, though I did finally make varsity after transferring to a new school that wasn’t playing for a state championship every year. And on my backyard court I was the sh*t. But still, I look back on all the time spent practicing and worrying about basketball and feel as if I could have done something else as a teen. Like invent Google, participate in the Model United Nations, or better yet…watch more Skinemax!

Twenty-plus years later my 6-year-old has joined a YMCA basketball team. When he signed up I assumed everyone in the league would be a beginner. They were not. Some of the kids appeared to have been born shooting jumpers out their moms’ birth canals. These were the kids whose parents yelled during games, often in disappointment. Others had at least played organized basketball. And a few of the kids were like Nile; they had never touched a basketball.

Nile’s first couple practices and games were rough. Instead of dribbling the ball he just slapped it. He fell down a lot. He pulled a Gibson and shot the ball in the wrong hoop. But he seemed to be having fun, except when his coach confused him by using basketball jargon like “dominant hand.” (Nile would look over at me in terror and mouth, “I don’t know what that means!”)

We started practicing at home and he improved. Fast. He learned to dribble without looking at the ball and to play defense by sliding his feet. I bought him a pair of Nikes, his first pair of name brand name shoes. (Funny. He was used to his shoes having a plain design, so he thought the Nike sign was a tag that had to pulled off.) Within a few weeks, he went from the least-skilled player on his team to a middle-of-the-pack player.

As he got more interested in becoming a better player, my competitive drive increased. I encouraged him to be more aggressive. Like me, he’s a bit passive. But if you wrong us, we’ll rip out your kidneys and flash fry ’em, or at least fantasize about doing so, more so if hot sauce is available. “You don’t have to be nice in basketball,” I told him. And then, “Don’t let that kid cut you in line again. It was your turn to do the drill.”

Then came the worst game of the year. The coach let the most talented player on the team shoot each time down the court. The opposing team’s best player did the same. It was a one-on-one contest with eight other people on the court yelling, “Ball! Ball! Ball!”

At the end of the game I felt like approaching the coach and yelling, “That’s not FU**IN’ basketball!” But of course I just left quietly and complained to my wife. I even hated on the other players, thinking to myself, “He can play and everything, but is he reading above his grade level?” It felt ugly. I was in danger of turning into the asshole sports dad of the Six and Under Basketball League.

I took the next game off, and had my wife take him to the game, though Nile and I did run through some drills in the basement before he left. I had a funny feeling he’d make his first shot, but I didn’t want to say anything and jinx it. And I don’t even believe in jinxes. See, that’s what basketball does to me.

And yep, he did make his first shot. It came after an offensive rebound. He told me that the crowd cheered, and not with laughter. I seemed to be more excited than he did. He mentioned his Junie B. Jones book that day more than the game. Maybe that’s a good thing. It’s nice to have a variety of interests. Sure, you can learn life lessons from sports, but you learn just as many from studying abroad or listening to Wu-Tang, who will always be for the children.

But if Nile does become addicted to basketball, I’m all for it. And I’ll be there to offer the training and guidance he needs to kick Solomon Schechter’s ass.