Home Commentary & Short Stories A Weekend Alone With My Boys: Lord Don’t Let Me Bop These Kids Over The Head With A Cereal Box

It’s almost noon. My two youngest boys have just returned home from preschool, where they were quiet and well-behaved. But now they’re back in their comfort zone. They quickly resort to behaviors my wife and I are used to seeing: sweet brotherly play interrupted by fits of rage, 95 decibel demands for art projects that I probably threw away, sticking their fingers in the dog’s ears, and jokes about “boo-boo.”

They ask to go outside and ride bikes. It’s 34 degrees. My wife, who’s white and supposedly more culturally acclimated to the cold, doesn’t want to go with them. To avoid dealing with simultaneous tantrums, I bundle up and take ’em out. An argument starts before they even get the bikes from the garage. Larke, the baby, is playing with a pogo stick that belongs to my oldest son, Nile, who’s at school. Ca$$ius, who believes he’s responsible for regulating toy transactions, throws a fit, tears and all. “That’s Nile’s! Get off it!” I tell him Nile doesn’t care. “How do you know!” he screams. “Cause Dada knows a lot of things.” Tantrum continues. I ignore. Tantrum continues. I tell him, “I’m not gonna sit outside in the cold and listen to you cry all day.” Tantrum continues. I drag him back in the house. Larke follows us, “OK. I can go out later,” he says in an understanding manner.

The tantrum gets worse. Ca$$ius swings his limbs and screams wildly. He catches with a good smack that lands far too close to the machinery that helped to create him. I smack his butt, restrain his arms, and carry him into his room. I sit with him and try to calm him. Too late. He’s only 4, but he’s down for a scrap. For the sake of both of us, I leave the room and hold the door closed. He kicks at it and screams. Amber runs upstairs to see what’s wrong. We usually play calm cop/out of control cop depending on which of us is deranged at the time. “He’s just bad,” I tell her, as I hold the door. She screams in a hushed voice: “Don’t say that! That’s not true!” I feel control leaving my body, “Well, he is! Look at him!” Now she’s about to cry. I let go of the door. They hug it out and calm is restored.

Later that day I think about my three-plus years as a stay-at-home dad. The kids weren’t the least bit self-sufficient, nor were they in school. It was nonstop monitoring and teaching (and laughs). Sure, sometimes I dozed off on them after too much wine for lunch and responded to tantrums with tantrums of my own, but for the most part, I just threw on my baby carrier, grabbed the stroller, and handled behavioral crises with calm. But now…man, I might get to wraslin’ one of these lil’ ni**@s. And I wonder…have my skills as a parent deteriorated?

Well, what better way to find out than a weekend alone with my three boys while my wife enjoys a short girls’ trip to Denver.

Day One
Nile had a YMCA basketball game at 9 a.m. He began the season as the least skilled 6-year-old in Central Ohio. Hey, just being honest. But in the two weeks after, I taught him to dribble, rebound, shoot a bit, and not be scared of the ball. But I didn’t really go over the rules. The game began. Nile grabbed a rebound and took off down the court without dribbling, like he was holding a relay baton. The ref blew the whistle and Nile looked ashamed. He glanced at me for approval; I gave him a thumbs up. Then I made his brothers cheer. It was progress! During the prior game he had shot at the wrong basket, just as I did in my day, though at a much older and much more embarrassing age, now he was at least going the right way.

After the game, we went to McDonald’s. The plan was just to get a yogurt and crash the playground, but McDonald’s in-store Happy Meal advertising is great at influencing undeveloped minds and crushing the wills of health-minded parents. I gave in to the kids’ wishes and got three Happy Meals, each came with a free Transformers mask. They devoured the chemicals and then went to the playground. It was packed; there was a private birthday party going on. I gathered my boys before they took their shoes off. “When I say it’s time to go, it’s time to go. No talkin’ back, no arguing. I’m telling you now. Everybody say OK.” Great two-way communication, huh?

We returned home and the kids spent hours playing “Africa” in the backyard. It’s a game where they pretend to be explorers who rob the continent of its most valuable resources and strongest people. Then they divide up the land for colonization, support dictators, and complain about the lack of democratic progress in the continent’s countries. Just kidding. It’s a game where they walk along the Nile River (my oldest son’s namesake) and capture wild animals.

Hours passed without a single fight or tantrum. This was not normal. I checked on them periodically, though I was careful not to break the golden rule of parenting: If the kids are quiet, leave ’em the hell alone. I brought them in for dinner. A relatively easy bedtime routine followed 90 minutes later. They were asleep by 8:15 p.m., earlier than usual. I celebrated by watching a boxing match and drinking half a bottle of wine and a few beers. I nodded off thinking, “Man, I could be a stay-at-home dad again.”

Day Two
Ca$$ius came to my bed around 3 a.m., screaming because his ear hurt. I wrapped myself in the blanket and walked to the kitchen for liquid ibuprofen and ear drops. After the meds, we fell asleep for another 20 minutes before the screaming started again. “I miss Mama! I miss Mama! Call Mama!” Of course she was in Denver and probably in a deep edible-induced sleep. “It’s too late to call. She’ll call you in the morning. Go to sleep! Or go in the garage and sleep!” More crying. So I called Amber and told Ca$$ius to leave a message. Hearing her voicemail greeting calmed him. Still, the commotion awakened the other two. They came to my bed and slept in various directions, limbs flinging for space. By 6 a.m. they were smacking and pulling me to get up. I kicked ’em all out: “Dang! Go in the kitchen and get a yogurt. Come back to bed after you eat.”

The rest of the morning was brutal. Everyone’s sleep is off. Fights and arguments, and yeah, maybe I bopped one of the boys over the head with an empty cereal box. After a few hours of chaos, I put everyone in the car. They asked where we were going. “It’s a surprise,” I said. It was a surprise to me, too. I just wanted to drive in hopes they’d fall asleep.

The two youngest were asleep within 10 minutes. Nile was also nodding off, but his curiosity kept him awake. “Where we going, Dada?” I took the exit for Ikea, where one can find stylish furniture, free babysitting, and good salmon. But it was Sunday and way too crowded. There wasn’t even a legit parking space to be found. Must have been a lot of parents suffering from kid fatigue.

So we went to Chuck E. Cheese. About a third of the games were broken and ol’ punk ass Chuck E. never came out to dance, but the kids had fun. We played the games 53 times and the kids were rewarded with enough tickets to get three tiny pieces of candy. I got a bookmark. Well, and a beer. Chuck E. Cheese sells $4 beers. Not bad. By the way, the only thing worse than a Walmart line on Black Friday is waiting for kids to pick their prizes in Chuck E. Cheese. Come on! Your choices are an Airhead or a plastic pinkie ring. Neither is going to last longer than a tenth of the time it takes you to decide. PICK ONE!

Anyhow, Chuck E. Cheese set the mood for the rest of the day. After returning home, we played outside and chased FedEx drivers, tried to resuscitate some type of weird beetle-praying mantis hybrid bug, and drew some zombies. I also let each of them steer our minivan/sport wagon around the block while I pushed the gas. Next thing I knew, it was time for dinner and bed, and in the morning, work and school, and then, Mom’s return. 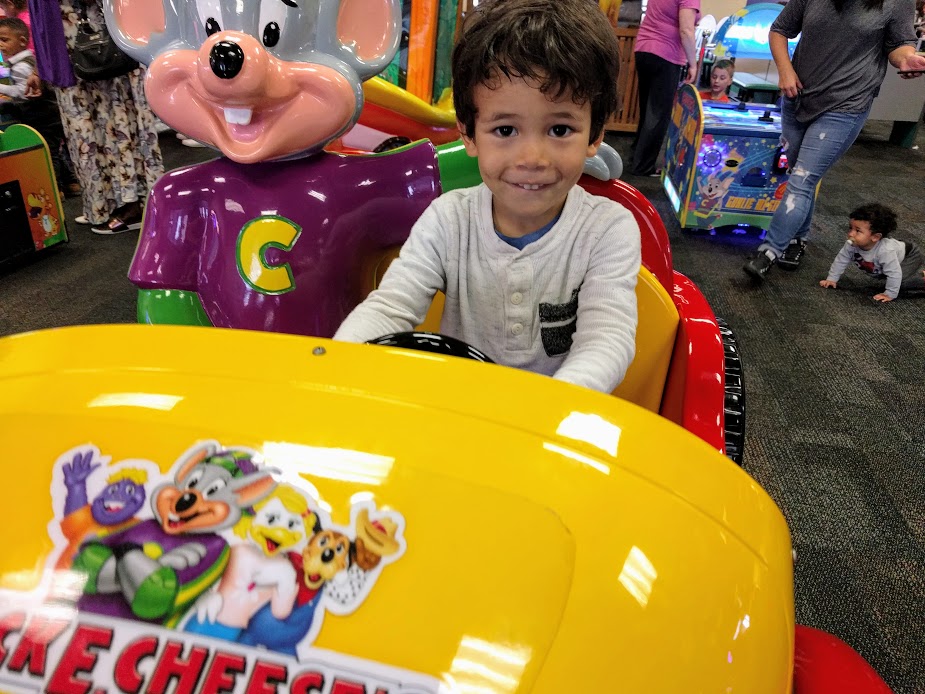 The Aftermath
By Monday, I had regained confidence in my ability to remain calm while raising three boys who will be able to kick my ass in about seven years. Whatever the issue–fighting, whining, coming into my bed as I type this at 2 a.m. and asking “Why you always stare at that thing?”–it’s really just minor. There’s no need to give ’em the Joe Jackson treatment, though the potential millions that such parenting can generate is hard to pass up.

The time alone with the kids also reminded me that like wild animals, the boys need time to roam in the outdoors, even if that free time is spent pretending to be wolves and smelling each others’ asses (true story). Most of all, I felt oddly refreshed after the weekend. This will come in handy; Amber’s out of town again next week. If I had more than a couple friends I’d say I was due for a guys’ trip. Guess I’ll go somewhere with my boys.