Finding A (Near) Courtside Ticket To See LeBron For About $50

Years ago, probably around 2002, I saw a tall guy wearing shades in a dark Cleveland nightclub. I laughed and said to my brother, “Who’s that?” My bro was like, “N*gg@ that’s LEBRON!” Oops.

Since then LeBron’s won a few championships and is on pace to become to a billionaire. I won a $25 gift card during a company Christmas party and I’m on pace to pay off my minivan next year. Well, actually the minivan’s in my wife’s name, but hey…

Anyway, as a Cavs fan since the days of Mark Price, and as an admirer of excellence, I’ve followed LeBron’s career closely. From 25 straight points against the Pistons to lead an otherwise mediocre Cavs team to the Finals, to the terribly orchestrated but otherwise sensible Decision, to the passive aggressive tweets, to his growth as a social activist, to The Block and the 3-1 comeback, and to his development as the second greatest NBA player of all time, I’ve been there thinking, “This is a good dude and a baller!”

But until last week, I had never seen him play in person.

Here’s the thing: If I want to go to a concert or game and can’t afford a ticket close to the action, I’d rather stay home. With any LeBron game there’s a premium. An outrageous premium when he plays in Los Angeles, which has been NBA city closest to me during most of his career. And I wouldn’t pay thousand-something dollars to see anyone play ball, except maybe Prince, and only if he performed “Darling Nikki” and “The Beautiful Ones” at halftime.

But now that I’m living in Columbus, Ohio, I’m 2 to 3 hours away from three NBA teams: the Cavs, the Indiana Pacers, and the Detroit Pistons. So I’ve figured if I’m diligent with my online searches, maybe I can get a near-courtside ticket to see LeBron play in one of these cities for around $100.

What I’ve found is that tickets for Pistons game have gentrified along with the rest of Detroit. Crazy prices! The Indiana Pacers are one of the best values in the NBA. You can get an actual courtside seat for about $200 most games, though that price inflates to $700 on up when LeBron comes to town. As for the Cavs, our fans are spoiled. We can see LeBron at least 50 times a year, and some games are far more cheaper than others.

I lucked out when the Cavs hosted the lowly Atlanta Hawks. A few days before the game I found three tickets on StubHub (to be transferred via Flash Seats) for $57 each. They were 100 levels, third row, and next to the Cavs tunnel. Probably about 30 feet from the court. My family wasn’t too interested in going, and there was a threat of a snowstorm, so I resold two of the tickets for $90 each, which means I went to the game for free. So if there’s a “trick” for getting cheap, near-courtside Cavs tickets, I’d say it involves: bad weather, a lackluster opponent, and a weekday game. 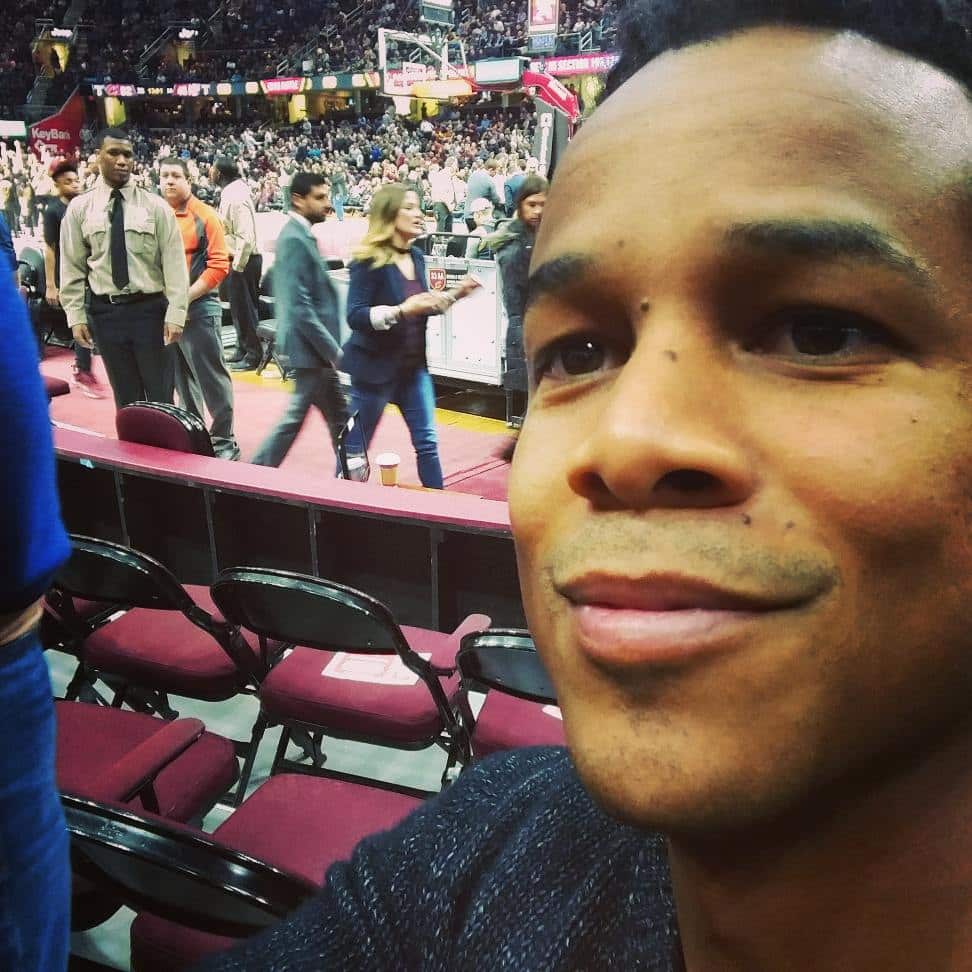 Before the game started, LeBron had already turned grown ass men into fan boys, who struggled to make space against the rail that separated us peasants from The King’s tunnel. Security guards raised their fists in unison, the sign that players were set to come out for shootaround. LeBron was the last to stroll onto the court, oblivious to the crowd and looking about as interested as the rest of us are when we clock into work. “No flash, no flash,” the guards yelled as everyone held up their phones.

Women dressed for a night at the club gathered in a row behind me. Two wore lanyards that indicted they were either related to or having “relations” with Cavs players or staff. One of the women had hilariously huge butt implants. At first glance I thought she was Khloe Kardashian, who currently has Cavs forward Tristan Thompson in the Sunken Place. It was not; this woman was Asian, and the last time I saw Khloe she was about as black as her dad, O.J. Simpson.

After fewer than 10 minutes of warming up, LeBron was drenched in a sweat that only Patrick Ewing or my old biology teacher with the bad thyroid can understand. He left the shootaround early to return to the locker room for treatment for what looked to be a sore back. Like many of the other players, especially Kevin Love, LeBron appeared taller and leaner and more well-defined than what we see on television.

The game began and LeBron quickly established his superiority. He was not just quicker and more explosive than the other players, he was smarter. He does this thing where after getting the ball during a set play, he puts his down and looks out the corner of the eye, as if he’s visualizing or thinking into existence what’s about to occur. Next thing you know he makes a crisp pass the leads to a bucket, or leads to a pass that leads to a bucket. He gets to the hoop at will–left hand, right hand, crossover, post up, fadeaway–anybody can get it! He launches a three; you assume he’s letting the defense off easy, but it’s all net–he’s 40 percent from there this year. Then, just as you wonder if he can still jump out the building, he leaps from the hash marks and stuffs a two-handed dunk, the ball cocked behind his head, as his legs twist awkwardly.

The Atlanta Hawks would soon be outclassed and down by 20. The horn sounded and LeBron’s intensity relented. He joked with teammates before tossing a towel to a young fan and walking to the locker room. LeBron finished with 25 points, 7 rebounds, and a career-high-tying 17 assists.

I got more than my money’s worth, and I’ll back. Courtside, I hope, maybe even sitting next to the real Khloe Kardashian. LeBron’s given us 15 years of excellence, but there won’t be many more. Los Angeles and father time are calling. Catch the show while you can.