B-Boy Battles And Beaches: A Quick Trip To Tampa

We made a quick trip to Tampa for tropical weather, but the first thing we did after arriving was eat hot ramen at Ichicoro. The restaurant is in Seminole Heights and its price point–$13 a bowl for two variations of pork belly ramen–reflected the neighborhood’s revitalization, or gentrification depending on how you feel about those sorts of things. Still, the restaurant’s slick scenery (thick wooden stools, donut-sized wooden spoons, and rap music) made it worth the price. Well, for one night at least. I can make some bomb ramen at home with avocado, green onions, mushrooms, and whatever meat scraps we have left over for about a dollar a bowl. OK…I’ll stop being cheap. 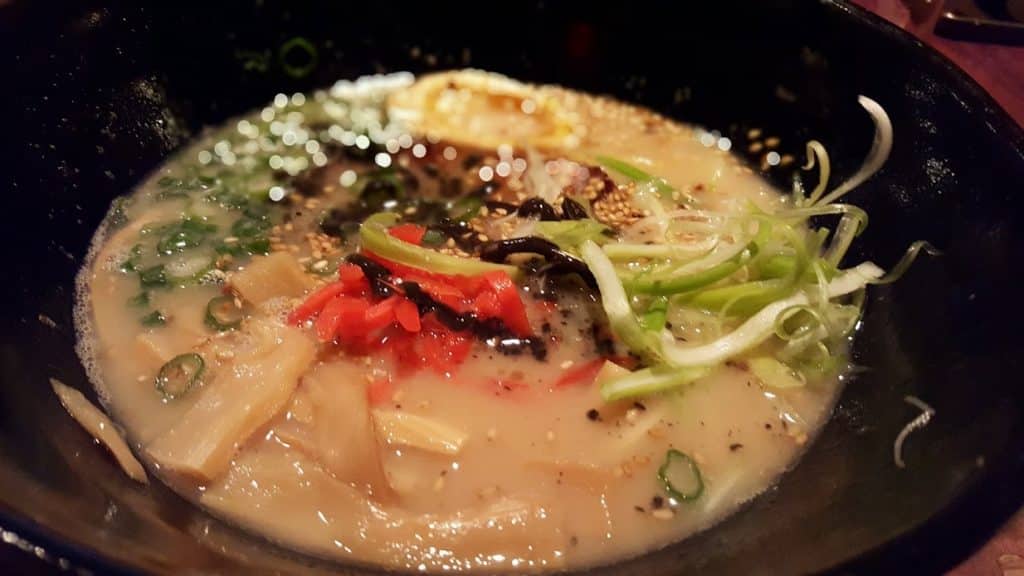 From there we went down the street to Independent. It’s a bar/cafe where you can drink with adults, dogs, and even infant who hang out late in the evening. We had a glass of wine and played Boggle, which is a noisy version of Scrabble with less room for creativity. The place was almost empty, it was Sunday and close to 11 p.m., but there was a couple next to us discussing political revolution via economic policy primarily focused on uplifting the poor.  I guess that’s better drunk talk than “Get at me bro!”

The last stop of our first night in Tampa was Ybor City, a historical part of town built by cigar slangin’ immigrants in the early 1900s. We ended up at a live music venue called Crowbar. They were hosting an old school hip hop night called Dirty Sundays, complete with activist art work (from @indyrock225) and jerk chicken for sale on the patio. 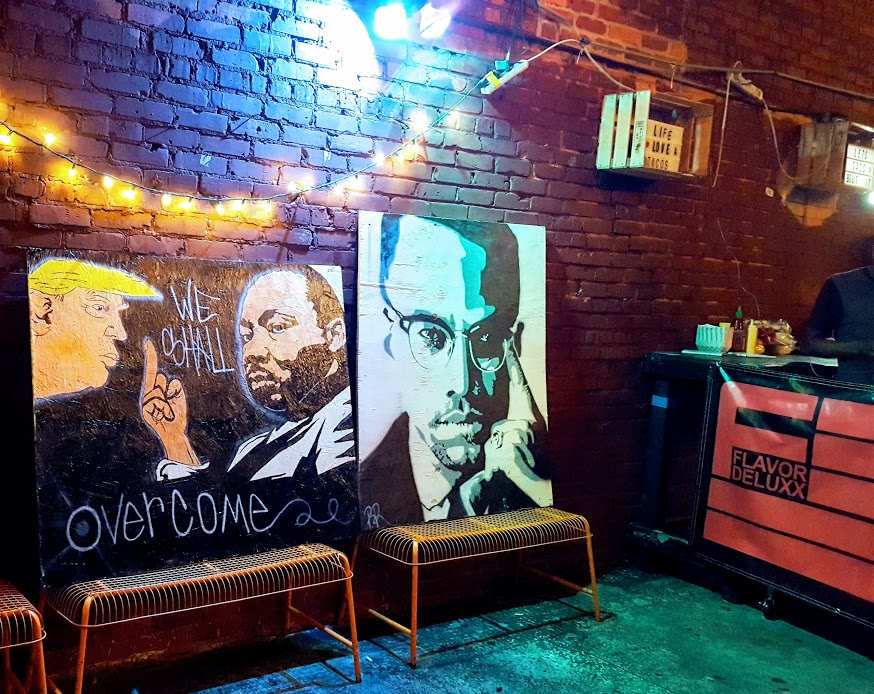 The highlight of the night: A b-boy battled a b-boy-in-training who was kind of dressed like Michael Jackson in “The Way You Make Me Feel” video. The more experienced dancer son’d him (as the cool kids say), which gave me a good laugh, a laugh made more enjoyable because the bartender slid me a cup full of Jack when I thought I was only getting a shot.

I spent the next morning working and tending to a hangover while Amber relaxed at the hotel pool. We stayed at the Holiday Inn near the University of South Florida. Our room was basic but remodeled and clean. We paid only $65 a night via Hotwire, which is about what it cost per person to fly down from Columbus on Frontier Airlines. It’s an urban university environment, so you get a good mix of people in the area, anyone from students to dope fiends who are somehow aware enough to obey Walk/Don’t Walk signs on the busy streets.

Our day outside the hotel began at the Florida Botanical Garden in nearby Largo. There were turtles and birds and plants that looked like those in that new Obama portrait that’s brought back rumors on far-right websites about his “body man,” Reggie Love. Unfortunately we didn’t see any alligators, though there were signs warning patrons not to “feed or molest” them, you dirty bastard.

According to Yelp, the closest and best beach to the botanical garden was Indian Rocks Beach. However, Yelp didn’t tell me that I would be integrating that entire area. Outside of the taco lady who made us lunch, there was not a single black or brown person for miles. It was like being in an old but new world modeled after Attorney General Jeff Sessions’ wet dream.

Having grown up in diverse areas and obviously having married a white woman, I’m comfortable navigating white spaces. But these weren’t your Bill Murray-loving type white folks who have a genuine curiosity and openness to others; they seemed to be older, sheltered white folks who gave stern and territorial glances as we passed. Ybor City this was not. 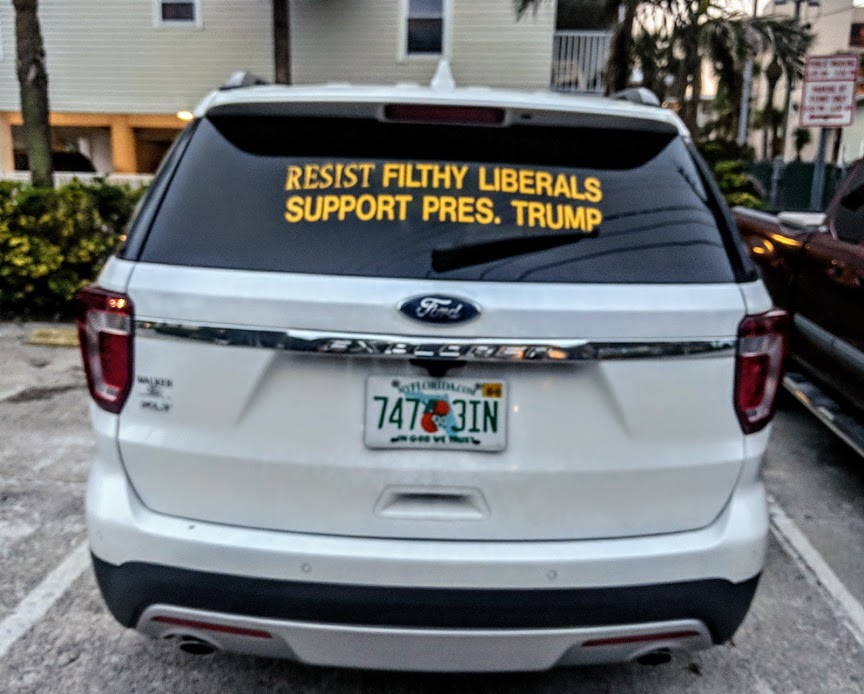 But whatever. I brought my laptop to the beach and worked while Amber hunted for shells for a to-be-determined craft project. The water was too cold to touch with more than a toe, but the sand was warm and free of litter. We stayed for hours before walking down to Groupers, a seafood joint on the strip that offered $1.75 beers. 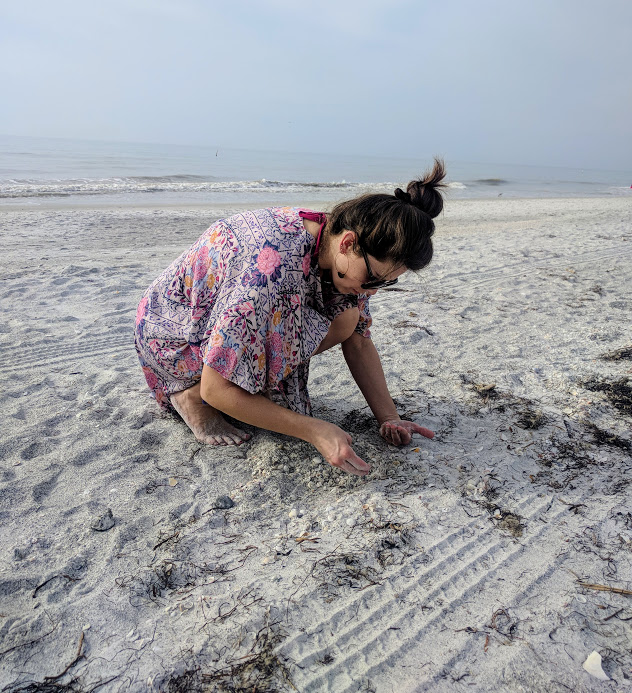 Groupers is only open four hours a day and they have some weird system where phone orders are filled before orders from people waiting in the restaurant. The result: a restaurant full of people frustrated people not being served. We waited over an hour and still didn’t have the steamed shrimp and ribs I ordered. I was going to leave some cash on the table and just walk out, but I remembered where I was and figured I might end up in jail, and later, the subject of the local paper’s misleading investigative report titled: “NIGGA STEALS SHRIMP!”

After about 80 minutes, we finally paid for the drinks and soup and started to leave. As we paid at the register, our shrimp (but not our ribs) came out. Amber gave the owner a piece of her mind. The owner seemed rattled but also unaccountable to her customers. I thought my normally conflict adverse wife might tell her to “Have several seats!” The owner didn’t even offer an apology, only a half-ass explanation of their weird system. We ate the shrimp as we walked a mile back to our car. My principles wanted me to think differently, but damn that shrimp was good.

Our trip ended with a midnight stroll down Clearwater Beach, one of the most popular beaches in all of Florida. It was much more grand than the beaches I grew accustomed to in California. Tall hotels and large restaurants privatized the area and obstructed views. But it seemed like a good place to party, provided one had enough energy to party.

We went back to the hotel after grabbing a bottle of wine and fried rice from a nearby strip mall. The food actually arrived on time. The celebration of our third anniversary would continue at the hotel-motel-Holiday Inn! 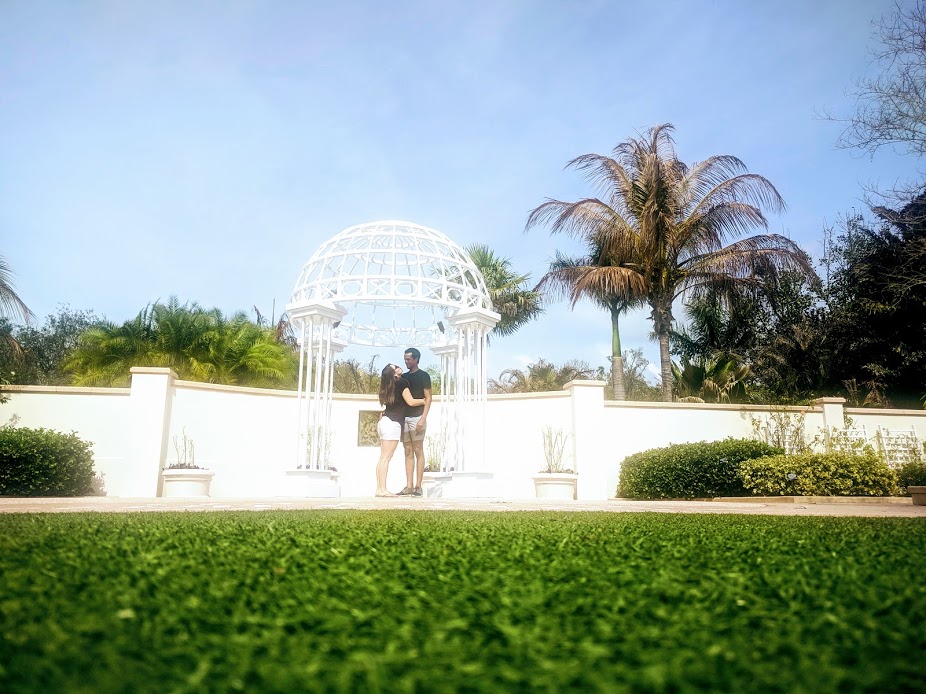 Kids Are Filthy Germ Keepers Who Will Sicken Your Entire Household