Home Parenting Should He Get The Matt Damon Or The Drake? Kids’ Haircuts In Interracial Relationships

Should He Get The Matt Damon Or The Drake? Kids’ Haircuts In Interracial Relationships 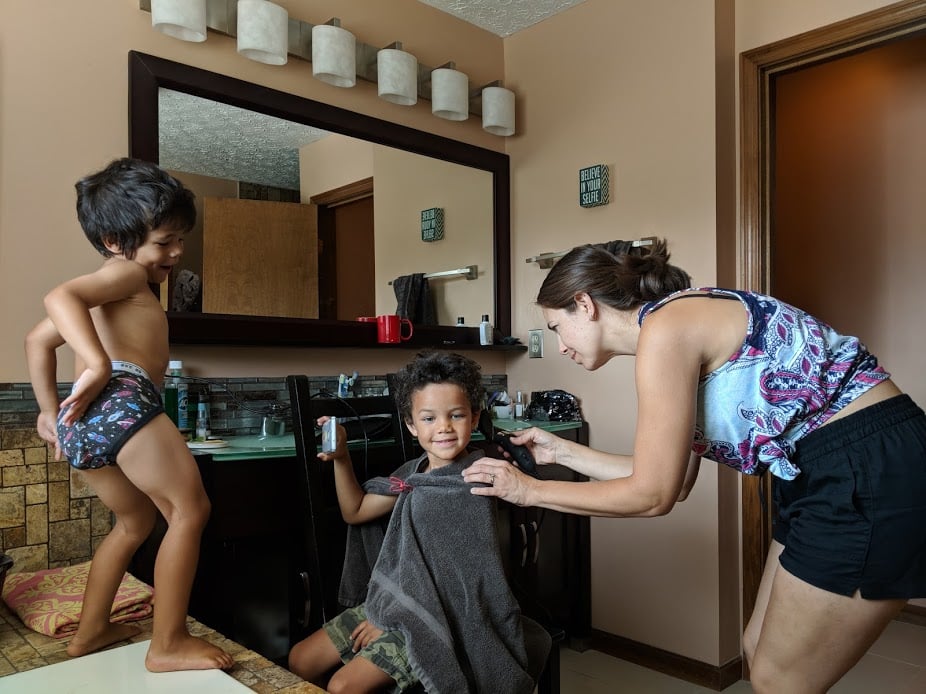 My mom once cut out a picture of Babyface and had me show it to my barber. She thought his style–flat on the sides, juice-infused curls on the top—would look good on me. I can’t say I was convinced of her assumption. After all, she was the same person who forcefully snipped off my rat tail because it was “played out,” a trauma that I can best describe as a second circumcision. But I listened to her anyway, and my hair turned out pretty damn smooth.

Now, 25 years later, the Gibson tradition of picking celebrity haircuts for our kids continues, but with an interracial twist.

This week we were deciding on back-to-school haircuts for the kids. Amber suggested our oldest, Nile, get a Matt Damon crewcut. The hell with Matt Damon. I thought he should get a really close cut like rapper/Instagram philosopher T.I. Such a cut would last an entire semester and it’s the go-to style for racially ambiguous woke guys like Shaun King. As for Nile, who probably should have been the decider, he wanted a fade with a part like Drake, Lord of All Biracials. I get it; they both have omnipotent hairlines and “God’s Plan” is the soundtrack of Nile’s 7-year-old life.

Mom won. He ended up with a Matt Damon.

Then there was the issue of where to take the kids for haircuts. Nile has mostly straight hair that swoops around in odd directions. Cassius has big curls that comb out into an exquisite fro. Larke has a dome of straight hair that makes him look like one of The Beatles, or a sheepdog. Of course that’s nothing out the ordinary, but barbershops, like churches, are segregated and sometimes politely reluctant to cut hair that’s different from the majority of their customers.

We’ve taken them to national chains like Fantastic Sam’s for $7 specials. The barbers’ apprehensive white hands had no clue what to do with their hair. The boys ended up with swag-deficient scissor cuts.

We did have a go-to black barbershop when we lived in San Diego. Our barber, who, by the way, claimed to be LeBron James’ real father—“Yeah, I got a history with Gloria (James)”–was used to cutting all types of hair. I mean…it’s Southern California, Filipinos and Latinos are also familiar with line-ups and the potential for hairline jokes if a cut goes wrong.

Upon moving to Ohio, I found a black barbershop near our home. The barbers were pretty good, but there were two levels of service: one for newbies and one for the regulars. Newbies had to wait for a chair, regulars just showed up for “appointments” that were not really scheduled. Plus there was contradictory pricing. You had to pay more if you had an afro, but kids’ cuts (priced at 20 damn dollars!) were not discounted. I’m like, “I thought you were cutting on a dollar-to-amount-of-hair ratio, man!”

And unlike our barber in California, the barber in Ohio lacked confidence when cutting Nile’s kind-of-white-folk hair. I gave him an overview of what to do and he looked at me like I asked him to give my boy a lacefront. I didn’t feel like I was getting through to him, so I ended with, “Just use your creativity.” The haircut was OK, but not $20-and-wait-in-the-shop-for-hours good.

Our solution was home cuts for Cassius and Larke. Amber’s pretty good with the clippers and curls tend to cover mistakes anyway. As for Larke, he’s only 4. If you’re gonna have a messed up haircut, 4 is a great age. As for Nile, he just started going to Amber’s hairdresser, a black lady who does all types of hair and only charges $10 for kids.

I’ll be sure he brings a picture of Drake next time he goes.

Who Would Have Thought That A Kidz Bop Show Would Be So…Lit?