Kids are not good people. They yank your limbs to get attention and make a lot of background noise when you’re on an important call with your parole officer. Like applying for a job that requires you to manually enter your work history, even though it’s already on the resume you uploaded, kids can be rage-inducing. But whoopings and other forms of corporal punishment are not effective long-term and often detrimental to the little ones’ psyches.

I’ve smacked a few legs in my time and I get the anger. I feel it every time my 4-year-old has an hour tantrum that involves kicking whoever’s near and yelling like a cast member on the Real Housewives of Ratchet. I feel it when my 5-year-old tells me “NO!,” as if I’m asking him to get ready for school and not telling him. And I feel it when my 3-year-old…actually, he’s really easy-going and often says little more than “oh” when you correct his behavior.

Taketh Away
Repossessing toys and other stuff made by tiny hands in East Asian slum factories is pretty effective, and unlike gifts given to ex-girlfriend’s kids can’t go on Judge Judy to force you to return the items. Some would say this method places too much of an emphasis on material items, but I’d rather take material things than take confidence and self-esteem, which can happen when parents beat that ass.

Marijuana
Parenting should be a qualifying condition for medical marijuana. When I ingest an edible (smoking makes me cough like a lil’ biz-nitch), I’m a better parent the following day. The plant enables me to enter a meditative-psychedelic state that places me above all the craziness. Literally. I’ve actually levitated and looked down at my life. But most of all, it allows me to get deep sleep, even if I’m not actually sleeping more hours. And a well-rested parent is a thoughtful and calm parent who doesn’t make rash Trump-like decisions. On a related note, smart folks say sleep deprivation is the new smoking, and they don’t mean cannabis.

Snatching
One of my greatest accomplishments as a father has been my ability to snatch kids with either hand. Like any great basketball player, parents need to be ambidextrous in order to keep the kids guessing. Also, the snatch is a great move when in public and unable to implement other discipline. For example, if your child is refusing to leave a store because you won’t buy a toy and fails to embrace the wise adage of “It’s cheaper on Amazon,” SNATCH ‘EM UP! It’s quick, efficient, and shows the parent’s physical prowess without the possible trauma associated with a whooping or other form of corporal punishment.

Crying
My wife cries when she’s overwhelmed with the kids. Maybe I would too if I wasn’t whooped as a kid and told to “Stop all that damn cryin’!” But what’s interesting is how kids react when their parents shed tears. They show empathy and calm down. Our second son, the malcontent of the three, once said to my wife, after she broke out in tears: “I lost your love and want to get it back.” Hell, I didn’t even know he could speak in complete sentences. Bonus: Crying reduces stress hormones.

Timeout
Timeout works until the kids find out you can trap their body but not their mind, as illustrated by one of my boys in the picture below. But I guess that isn’t so bad; a contemplative kid isn’t better than a rioting kid. Of course timeout is probably a lot less useful if you a big oaf of a teenager. 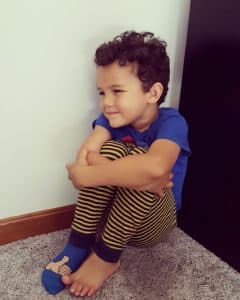 Ignore The Troll
Ignoring kids when they’re acting up is as hard as ignoring Facebook trolls. You know the troll just wants attention, but then they go too far and you’re like, “It’s war now, bro! Bring it!” Then a long back-and-forth starts and afterwards you feel disappointed that you wasted time and therefore life on a whole bunch of nothing. Kids are the same. Ignore ’em until they do something positive, or at least until they do something that you can record and post for a lot of Instagram likes:)

I Joke…But Whoopings Are Serious
Corporal punishment is still very much alive, especially among us black folks; we’re twice as likely to whoop our kids when compared to Latinos or whites. We tend to romanticize it with “I’m remember that one time…” stories and explain that we turned out O.K., though maybe we turned out “O.K.” in spite of the whoopings…Not to mention the 360 black kids killed on average each year by parental beatings that often started with whoopings and “escalated as the child got bigger” (more info in a great piece that ran in The New York Times).

Anyhow, I don’t have all the answers, just a possible few alternatives to corporal punishment. And who knows, my kids may still end up on an Out of Control Teens episode of Maury. But it won’t be because they didn’t get whoopings.

What It’s Like To Have A Potential Employer Ghost You…After Three Damn Interviews!

Is There A Normal Age For Potty Training? (Or I Am Just Tired Of Wiping His Butt)?

Reply Retweet Favorite
Waiting for that "Sorry, boo. Got a little too comfortable..." tweet from Biden. 😬🤣

Reply Retweet Favorite
One of may reasons why I don't care if some make more on unemployment than they did at work, and are in no rush to… https://t.co/b8I5tDhE4J

Reply Retweet Favorite
Not saying my breath is tart, just saying since wearing a mask I've learned it's a little hotter than I would have guessed.

Reply Retweet Favorite
Three kids, five years of marriage...only to find out my wife thinks Stevie Wonder ad-libs too much on "Love's in N… https://t.co/VQtmpx0Pmj