Home Travel Me, A Moving Truck, And A Few Bars: Beer And Bathroom Graffiti In Amarillo, Texas

The girthy bug creeping across the bathroom floor didn’t even bother to run when I cut on the light. Maybe he felt at home in the hotel. Or maybe he knew death was imminent. I ripped a piece of toilet paper and pressed on the roach-beetle hybrid until I heard a crunch. The dirty job took more force than I expected. I turned over the tissue and inspected the mess. Yep, mission accomplished. Then I went to the steakhouse next door. I ate a sirloin and a baked potato stuffed with chronic disease and regret. It was served by a fast ass girl wearing tight jeans and a flannel shirt. Welcome to Amarillo, Texas.

After a shower and a nap, I caught Lyft to a bar called Rumors. One Yelp reviewer described it as a home for Amarillo’s “trash and riff raff” and another said it “always feels like a fight is two minutes from breaking out.” To me, it sounded like a place to see real Amarillo.

Cigarette smoke hit me as soon as I walked into Rumors. (Texas is one of the few states that gives smokers the freedom to endanger the health of others in bars.) Through the haze I saw an eclectic crowd. There were black folks, white women with gold teeth, thick Mexicans, and a few rowdy-looking white dudes.

The bartender served me a $2 Shiner Bock draft. Then she lit a cigarette and started writing in a notebook. I held cash in my hand and asked if she was writing down my tab. Nope. She was making plans for a back-to-school fundraiser to help out po’ kids. I gave her some tips on grant writing, and the next beer was on her. Well, kind of. She didn’t ask me to pay, so I didn’t. But then I thought maybe this some form of Texas kindness where I was supposed to initiate the transfer of money. I left $3 on the counter.

Midway through my third beer a flamboyantly gay guy sat next to me. I say “flamboyantly gay” because earlier he had announced to his girlfriends (and most of the bar) that he would “ride Keith Urban’s face for an hour!” He was blond and emaciated and slightly resembled a down-on-his-luck Alexander Skarsgard. He put his hand on my back and said, “I’m sorry, did you say something to me?” I chuckled. “You must’a heard me talking to the bartender.” He gave me a “Well f**k you then!” look and turned away.

A tipsy brown woman grabbed the other open seat next to me. She was probably in her early 40s and somewhere between black-man-thick and heavyset. After the usual bar pleasantries and small talk, I mentioned my wife and kids. She explained that she too had been married. Unfortunately it didn’t work out. The dying relationship ended when a younger woman parked outside their home and yelled for the husband to hurry up and come outside. The woman outside, according to the husband, was just someone he was teaching how to drive.

My next stop was R&R Bar. The crowd was sparse and made up of college students who all seemed to know each other. It was like one big group date and I was the older third wheel. The lone bartender served me a beer that was twice as expensive as the brews at Rumors. She was probably in her 60s. I assumed she owned the place. The conversation was non-existent and the people watching was soon played out. Before leaving, I took a toilet break and found what’s possibly the greatest bathroom graffiti of all time. 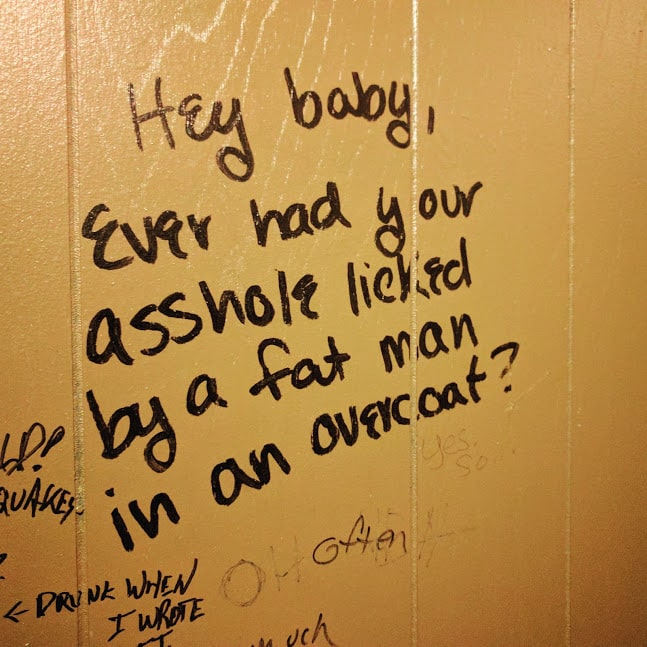 I walked over to a bar across the street whose name I can’t recall. Everyone was tatted with legit artwork and I felt self-conscious about my rookie tattoo that I’ve grown to dislike. I got it when I was 16. I only had $75 and letters were $15 each, so I got my name needled on my bicep. It could have been worse. My older brother got his initials and birth date inked on his forearm.

I drank a whiskey and Coke and caught a ride back to the hotel. Before bed, I shook the sheets and did a roach inspection. Nothing was found, but I slept with the lights on. Next stop: Tulsa, Oklahoma.

Me, A Moving Truck, And A Few Bars: Albuquerque, NM