Jay Z is what up-and-coming marketing executives who buy glasses from Warby Parker call an influencer. He takes otherwise insignificant items–plain ol’ white shoes, champagne, horrendous clothing–puts a little Hov on it, and makes ’em cool to young folks with disposable income and bad savings habits. Then he raps about it every few years and everyone’s like, “Jay’s THE MAN!” I’m part of that everyone. So of course I jumped at the chance to abandon my family during Labor Day weekend and go to his Made In America music festival.

Unfortunately I missed the first day of the two-day festival. My mind was willing but my stomach was not. I ended up stopping at nearly every rest stop and welcome center on the Pennsylvania Turnpike and running to the bathroom for numerous two-flushers. (My apologies to the families who were unable to access the family restroom because of me. Despite my selfishness, I did leave the toilet seat warm for your kids.)

Anyhow, an expected seven-hour drive from Columbus to Philadelphia took about 12 hours. Some of the more notable acts I missed were Migos, Solange, and J. Cole. As far as missing Migos…I’ve seen Das EFX. Solange gave a hell of a show, according to my best friend, Mike, who actually arrived on time. Though it couldn’t have been more entertaining than that video she shot on the elevator with Jay Z. As for J. Cole, my barber put it the best, “They got J. Cole performing at night cause he puts ni**as to sleep!”

The next day, the plan was to get motivated early enough to see Pusha T. But getting a buzz for a fair price in Whole Foods’ pub, which was right outside the venue, proved a more attractive option. Two beers and an old man glass of wine later, we finally made it into the festival.

What stood out the most were mud and young people. Some little shit said to me, “Nice sweater, bro,” which led me to realize I was probably the only person out of thousands wearing a wool sweater instead a clever t-shirt. I wanted to remind him that he’s really short and will therefore end up making less money and having fewer sexual partners than us tall guys, but I figured maybe he wasn’t being sarcastic. Yeah, right… 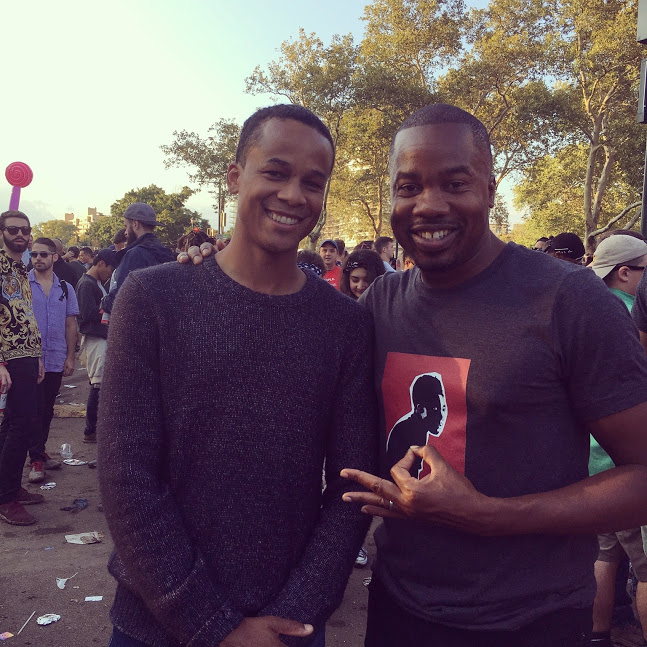 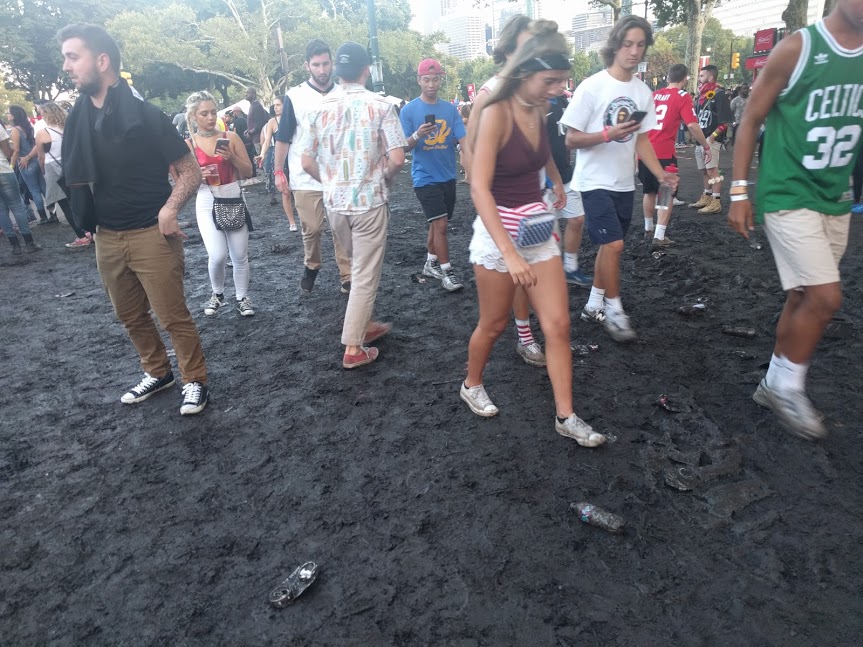 A lil’ white girl in struggle booty shorts asked me for a sip of my $14 Budweiser tall boy, which sort of reminded of that time some dude asked for a slice of pizza as I walked out of Little Caesar’s: “Let me get a slice, my ni**a.” Both times I just said “Cool,” more so out of surprise than kindness. Anyway, I let her have sip, and then she asked for another. I smartened up, “Nah, go on. We’re not ’bout to share this beer.” Later a bro handed me $20 and damn near begged me to buy him a beer. I obliged; I know the feeling of wanting but not having access to a drink. I feel it anytime my wife and I run out of wine. I only wish I had kept his change.

The first performance I saw was by Run the Jewels. Mike, who’s been radicalized by Netflix’s What The Health, suggested Killer Mike could benefit from a plant-based diet. That may be true. His arms are starting to look short, like Big Pun’s. But he had enough energy to give a good show, though I wanted to hear more from their debut album than their most recent, which I thought was just OK. 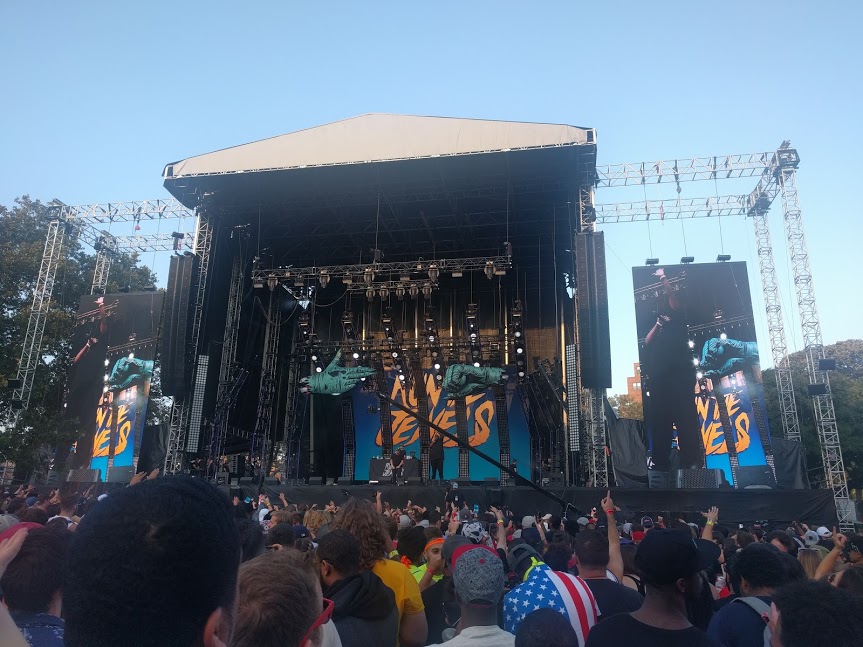 The Chainsmokers were next up. I liked their album a lot, but I was not expecting much of a performance. They’re producers and most of their good songs have features, and I figured Coldplay was not going to show up. But the two little guys didn’t need them. They sing pretty well and get down on the instruments. Plus their show had lots of explosions that were not gunshots. Maybe the research behind that short guys are less successful theory is flawed. 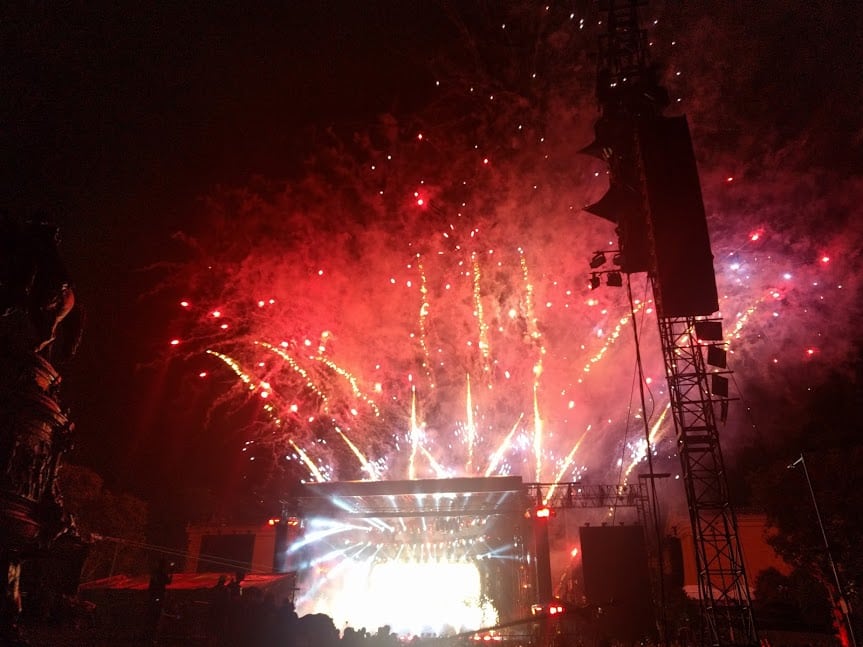 Jay Z’s set closed the festival and youngins with bad manners tried to push their way through the crowd for a better view, only to be cursed out by my boy Mike. Jay started the show with his song featuring (an absent) Damian Marley. “F**k all this pretty Shawn Carter sh*t, ni**a Hov!” He was wearing a ball cap and a big ol’ sweatsuit, which looked about as cool as my wool sweater. It was Beyonce’s birthday so he must have figured he’d just throw something on and shower after the show before they go out.

Jay went through most of his hits and some of his more recent, subdued tracks. Dude’s a pro. None of that running out of breath and having 37 recent parolees on stage with him to fill in the words. When he did need a break he paused and asked different parts of the crowd to form a mosh pit. Hey, know your young, melanin-lite audience.

After about a good hour or so, the show and the festival was over. Jay came out for an encore but it was on a different stage. Thousands of people ran his way, but that was too much for me. Jay’s cool and all, but I’m running to see anyone not named Michael Jackson. Though I guess I am willing to drive 12 hours.