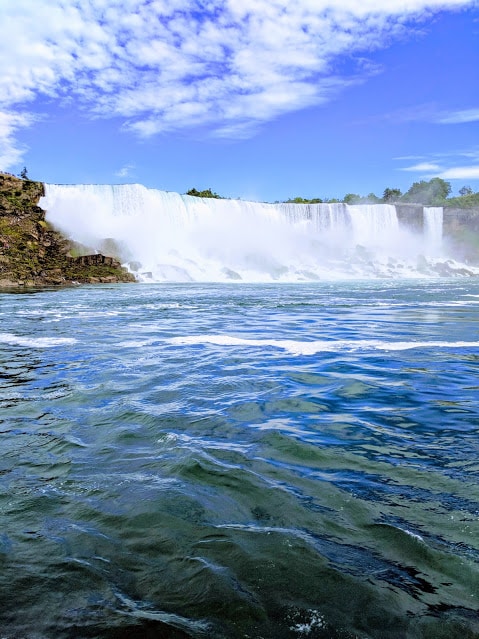 There may be no other natural wonder as commercialized as Niagara Falls. I can only speak on the Canadian side (I hear the American side near Buffalo is rundown and grimy), but the area surrounding Niagara Falls, Ontario is a big-time tourist trap: fast food at airport prices, mediocre entertainment, and resort hotels that aren’t actually resorts. But those falls…man, those falls make it worth the trip. Well, for just a night, or maybe even a few hours if you’re childless and can manage to get in and out the city without being lured into dinosaur miniature golf and other kid-themed attractions.

After a six-hour drive from Columbus, Ohio, we crossed the border into Canada and got yelled at by an agent who looked and sounded like Judge Judy. I thought she was waving my car towards her station, but she was actually asking a pedestrian who was nowhere near us to come forward. Strike one. Then she saw my wife’s passport was expired. “So you didn’t have time to renew your passport before coming to Canada?” Silence. “No, I’m asking you!” Strike two. There would be no strike three. She let us through, and just as I read online, Canadian border agents are lenient when it comes to dealing with Americans with suspect papers.

Straight to the Hornblower Niagara Cruise we went. It’s about $20 per adult and $12 per child 5 and over, depending on the exchange rate. The free admission for children under 5 is an honor system, so as long as your 6-year-old isn’t gargantuan he or she can just walk right on the boat, which is what we did with our 5-year-old and probably could have done with our soon to be 7-year-old. The kids were a little scared to get on, but I said I’d hold them, which I had no intention on doing. No worries. Their fears eased and they were distracted by the boat as soon as we boarded. 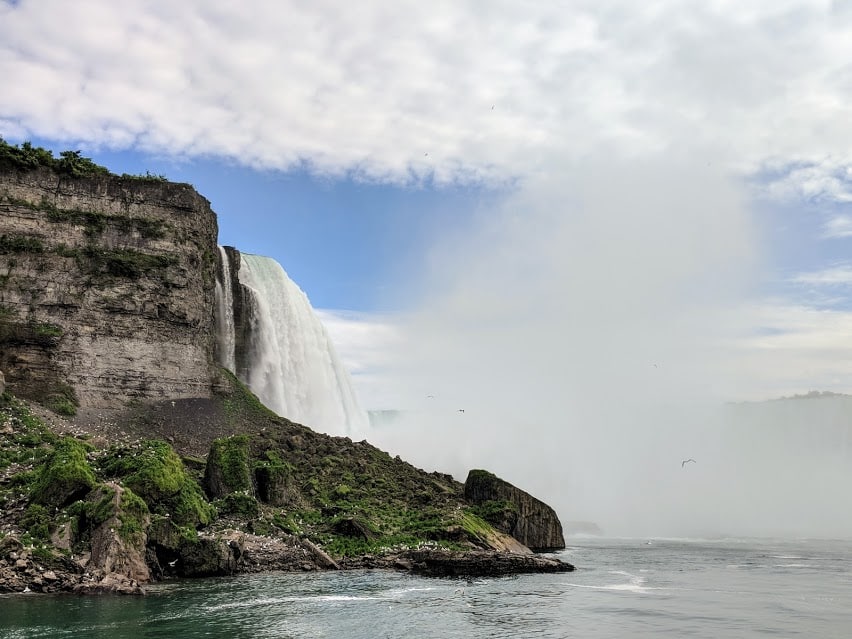 The cruise was well worth the cost. The boat took us close enough to the waterfalls to get soaked–wear the free poncho–and was exciting enough to make me think, “Man, what if this boat tipped over.” Plus we got the white-out views that come with being a three-pointer away from the falls. The trip was over in about 20 minutes, and there was no wait to get on. (We were there on a Tuesday early evening. I read that the wait can be two-plus hours during peak times.) 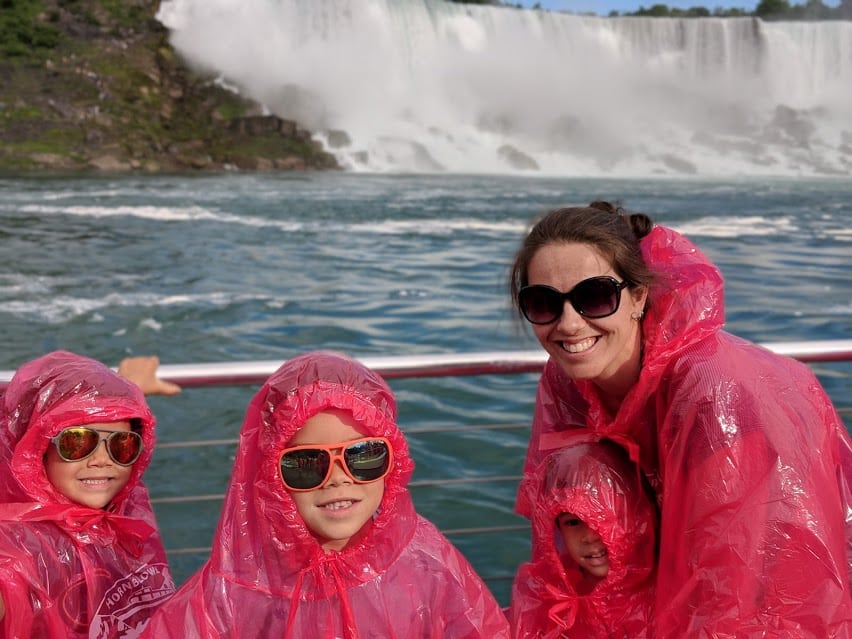 After the Hornblower cruise, I was pumped up and thinking how we should consider extending our planned one-night stay. All that changed after checking into the Skyline Hotel & Waterpark.

I only paid $50 for the room via Hotwire, but because we bought on a secondary website our stay did not include admission to the water park, though we could go if we paid an extra $120. Then there was the $22 parking fee, $12 “resort” fee, TV remote control that barely worked due to low batteries, beds with broken springs made worse by my jumping kids, non-Gibson left hair in the shower, and free bottles of water that appeared to have been opened and refilled. Now, I’m all for recycling, but not at the risk of drinking after someone and ending up with cauliflower-like lesions growing around my lips. And to think Skyline is supposedly a 3-star hotel. Well, at least the wifi worked.

The five of us then went for a stroll through Clifton Hill, Niagara’s main strip of tourist traps. The kids enjoyed the cheesy fright houses and games (from the outside looking). We ended the night at a dingy Burger King, where we paid like $25 for a Whopper combo and three kids’ meals. But whatever, the kids had fun with the Nerf guns that came with the meals and stayed up shooting them in the hotel for a couple of hours.

The next morning was a lot more enjoyable. We went to the Butterfly Conservatory, a nature center where thousands of butterflies eat oranges and flirt with each other. Think of it as a sort of butterfly safari. Good times, though I rushed the family out as buses of lil’ loud students arrived and stole the butterflies’ attention and worked my nerves. 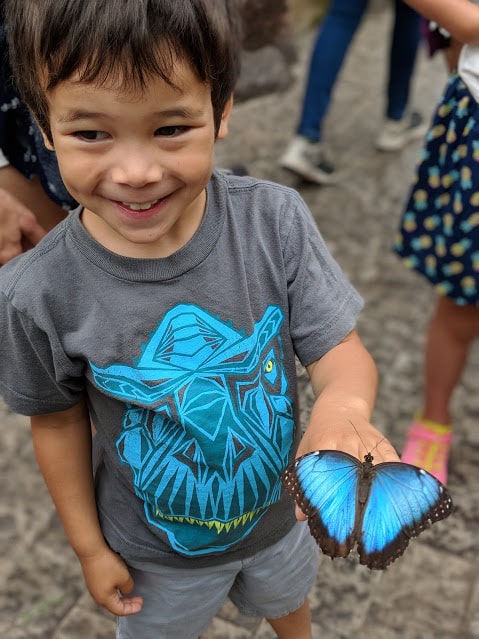 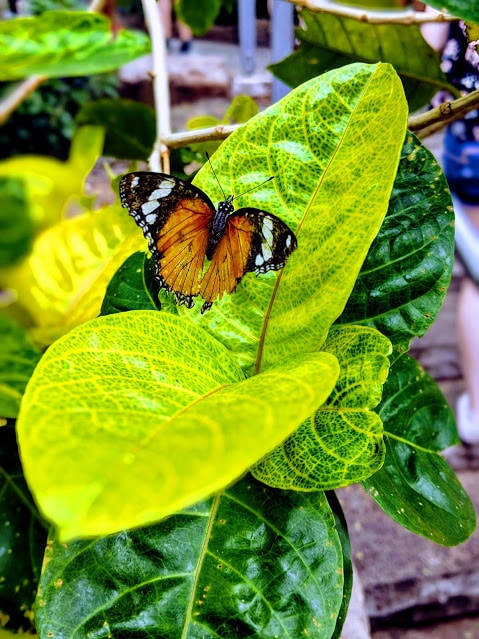 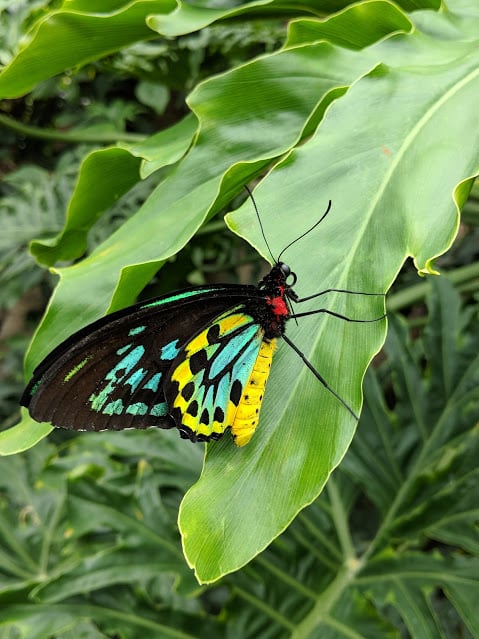 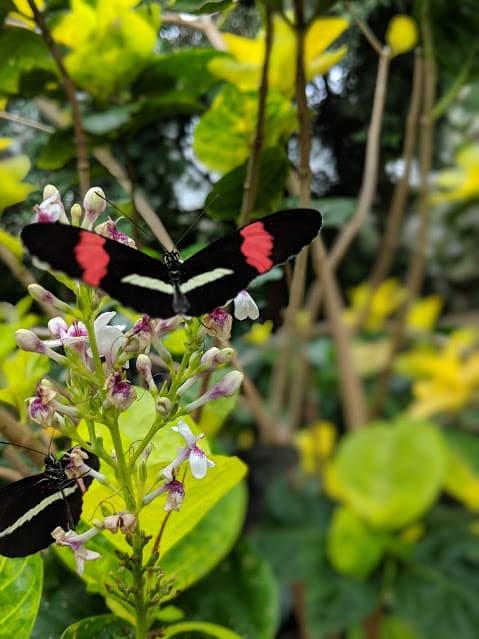 Before leaving Niagara, we made one last stop at a winery named Château des Charmes. It was a Wednesday early afternoon so we pretty much had the mansion to ourselves. My oldest boy, Nile, who had refused to get out the car until I snatched his ass up, ran circles around the fountain outside the winery as my wife, Amber, did a tasting with our two other boys in tow. She bought a bottle and just as we were leaving Nile took a spill in the fountain. I managed to quickly squeeze in an “I told you to stop running!” before asking if he was OK. He was, though soaked and baptized with a new attitude.

On towards Montreal we continued. 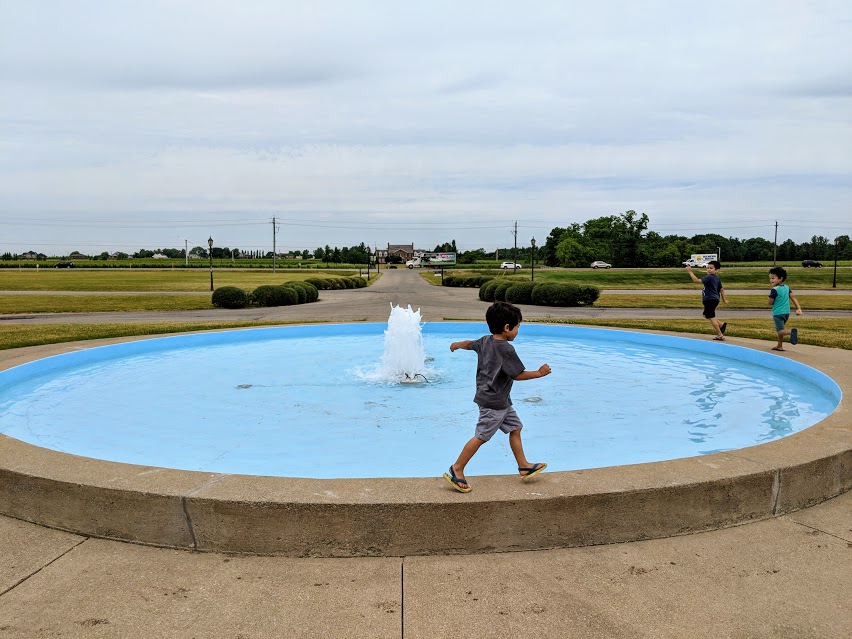 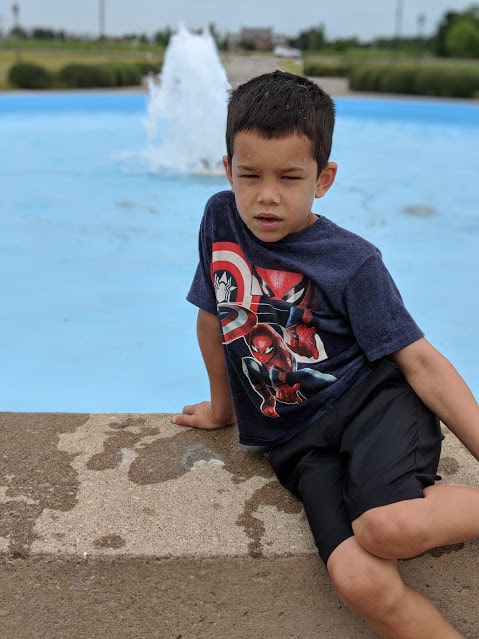 Filthy americunts come here to bitch and complain. Stay on your side of the border.

Well, “bitch and complain” and spend money that helps your economy. If you read more of my posts you’ll see that I love Canada, just not Niagara Falls. Anyhow, thanks for reading, Prime Minister Trudeau. Blackface scandal aside, it’s an honor!

Airbnb is wild. Spend $300 a night and hosts give you Pert 2-in-1 shampoo/conditioner. Not even Pert Plus.

Reply Retweet Favorite
Ever Save A Baby Fox That Has A Jar Stuck On Its Head? - https://t.co/dMfQvwkocr